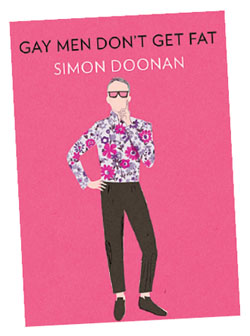 NEW YORK - Skinny French chicks and roly-poly straight men. Lesbian chic and the chaotic state of style. Nothing and nobody escapes the gaydar of the fabulously floral Simon Doonan in his new book, “Gay Men Don’t Get Fat.”

The ex-creator of edgy window displays for Barneys details his coming out moment as a boy of 10, reading a reporter’s account of gay men hooking up in a North London park after dark (“Sign me up!”).

He recounts his giddy deep dive into Christmas ornaments stashed in a White House storeroom by former first ladies as he worked with Michelle Obama on her first-year holiday decor, only to be upstaged by “those idiot Salahis” of red sari, gate-crashing infamy.

The diminutive Doonan was creative director at Barneys for 25 years. After a shake-up at the luxury retailer, he’s now creative ambassador-at-large. But he’s oh so much more: cheeky memoirist, provocative columnist and always hilarious chronicler of his very gay, very fun New York City life with husband Jonathan Adler, the potter and interior design expert, and their Norwich terrier Liberace.

When it comes to style, Doonan said, gays are the chosen people. From fashion to food, he sees gay men as the real culture keepers over all those hungry females in Mireille Guiliano’s “French Women Don’t Get Fat.”

“We gays have an unconventional world view,” he said. “We have the piercing objectivity and bold originality of the outsider. French women cannot compete with us. We are not bourgeois. We possess the indiscreet charm of the antibourgeoisie.”


Q. You’re “one funny gay nugget,” as Chelsea Handler summed up your book in a back-jacket blurb. Yet you say the intended audience is straight women. Do we straight women need educating? 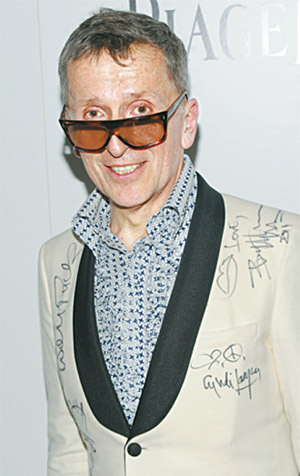 A. I want to liberate the women of the world and teach them to live with the stylish bravado of we gays - and wee gays like me. Being a woman has become so complicated and pressurized. I want to make it easier, or maybe just more creative. Fashion and style should be about personal expression.

Do you really fly coach?

I’m not part of the 1 percent. I’m a hardworking gay who is proud to fly coach, but only on short flights. I also ride the subway, and not in a Marie Antoinette kind of way. It really is the easiest way to get around.

You used to do the windows at Barneys. Do you miss that?

I dressed windows for almost 40 years. When I finally put down the glue gun last year it was something of a relief. Ditto the staple gun. However, I would highly recommend a career in window display to any budding fashionista. It’s been great for me.

You’re 59. Do you feel at peace with the aging process?

I loathe the idea of growing old gracefully. I fully intend to grow old eccentrically and dramatically. Brace yourselves! I have no issue with wrinkles or lines. I think people worry too much about that stuff. The most important thing is to stay fit. My fave exercises are tap dancing and runway modeling.

How would you define your approach to clothes and to life?

I’m a charismatic deviant with a freaky world view. I’m determined to extract all the nuggets and nuances from my fabulous gay life and hurl them at the general population with tremendous force and gusto.