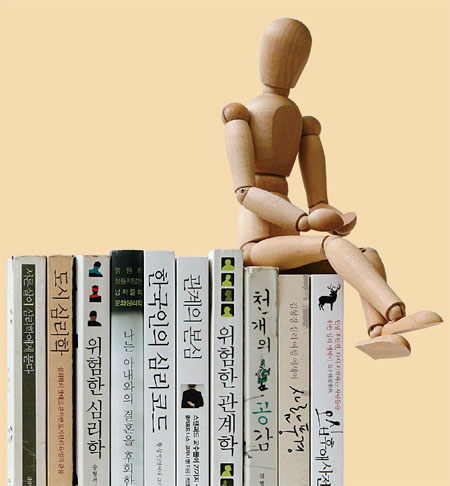 When Lee Sung-ah turned 30 last year, she said that no amount of ice cream or chitchat with friends was able to pull her out of her state of gloom and uncertainty.

“I was extremely anxious about turning 30 and not really knowing what I wanted to do with my life. I didn’t have a boyfriend and I hated my job,” the graduate student said.

During a trip to Kyobo Book Center one afternoon, Lee said that one particular book, “A Thirty-year-old Asks Psychology,” immediately grabbed her attention.

“I’m usually not into self-help books, but I’d heard that this book was quite legitimate and that it takes psychology and adapts it to everyday situations that people my age can identify with,” said Lee.

“I wasn’t ready to seek a shrink and I was getting nowhere with advice from friends. This book kind of did double duty in that sense. Reading the book, I felt like I was talking to a friend who happened to be a shrink.”

In recent years, public interest in self-help books like the one Lee mentioned has soared, with a new book on the subject rolling out each week.

According to Kyobo Book Center, the number of self-help books published in Korea rose fourfold last year compared to seven or eight years ago.

“A Thirty-year-old Asks Psychology,” published in 2008, sold over 600,000 copies and was one of the major books to ignite the public’s interest in self-help literature.

Following the book’s success, its publisher, Galleon Books, printed a sequel, titled “Psychology Answers a Thirty-year-old,” which included answers to questions by readers of “A Thirty-year-old Asks Psychology.” The sequel was another instant hit, with over 180,000 copies sold nationwide.

Speaking about the success of the two books, Galleon Books head Kang Su-jin said that a balanced mixture of accessibility and expertise was the key.

“The books are not philosophical texts so they are quite approachable. And the chapters discuss topics in which a 30-year-old would be interested, but within a mental health context,” Kang said. “In the past, 30-year-olds were treated as adults but these days, a typical 30-year-old would, after schooling, be only two to three years into their first job. At that age, many of them feel like they need some sort of mentoring.”

Yet 30-year-olds are not the only ones buying into the trend.

One of the best-selling self-help books of the last two or three years is “I Regret Marrying My Wife,” published in 2009.

Since then, the book, a collection of essays about marriage from the point-of-view of a middle-aged man, has sold over 300,000 copies.

“The book takes a humorous, relatable approach to marriage for middle-aged men. I think the book has become popular because it is written in a style that is warm and sympathetic,” said Kwon Junghee, senior editor at Sam and Parkers, the book’s publisher.

“I think the rise of these pop psychology books reflects the current interest in mental health among the public. Before, it was all about information, technology or money, but more and more, it seems people are curious once again about the human psyche and they want to understand themselves and others.”

Ha Ji-hyeon, a psychology professor at Konkuk University, pointed out that as more and more pop psychology books are published, not only are there more books available but the content in the books is improving as well.

“The majority of pop psychology books in the past were either really boring or included false theories ... But there are so many books like this being published now that readers can choose the one that fits their needs,” said Ha.

“When I try to order a psychology book from abroad written for academic purposes, I find that many of the books have already been translated into Korean.

“And there are now more places offering psychotherapy in Korea, besides medical facilities, and Koreans have generally become more interested in psychology and psychotherapy.”

As interest in mental health rises, local companies have started incorporating psychotherapy into their corporate culture.

At LG CNS, two trained psychotherapists work at a counseling center within the building called Maeumshimteo, whose name is a portmanteau of the Korean words for “mind shelter.”

Any LG CNS employee can go to the center for counseling or psychological tests, including the Myers-Briggs Type Indicator test and Minnesota Multiphasic Personality Inventory personality test.

“From first-year employees to department heads, many of our employees, from all types of backgrounds, come into our center,” said Ju Il-jeong, who heads Maeumshimteo. “The most prominent topics they talk about are related to raising children and problems in their marriages.”

Ju said that the counseling center abides by the doctor-patient confidentiality rule and that no one, including an employee’s superiors, has access to information about the content of the counseling sessions.

When the center first opened, Ju said that there were very few employees who came in for counseling because of a bias in Korean society against seeking psychotherapy.

“It wasn’t easy at first because Korean society still perceives a person who seeks psychotherapy as weak or flawed,” said Ju.

“Nowadays, though, the center is seeing a lot more employees come in and, in some cases, employees are coming in at the suggestion of their bosses.”

Yet despite the increased support for psychological exploration at major companies such as LG CNS, many people in the general population are still wary about the idea of psychotherapy.

Kim Hye-nam, head of the psychotherapy department at Nanoori Hospital, says that the success of self-help books can in some ways be attributed to people who feel depressed or lost who are trying to counsel themselves with a book instead of talking with either a trained practitioner or someone they trust.

“In the past, I think people felt more comfortable with seeking advice or counseling from a mentor such as a professor or older classmate, but these days, as society gets more and more competition-driven, people are less inclined to reveal their problems to others for fear that it will make them appear weak,” said Kim.

“In a way, reading psychology books is a way for modern day people to attend to their emotional insecurities and problems by themselves, without the assistance of others.”

Nanoori Hospital’s Kim Hye-nam said that the popularity of psychology books is a double-edged sword.

“The books are helpful in providing readers with a chance to reflect on themselves, but the potential problem with that is that they might be spreading false information or interpretations of psychological theories in an attempt to provide readers with simple answers,” said Kim. “Reading one or two pages of a pop psychology book and getting two or three years of psychological treatment are very different things.”

Lee Na-mi, a licensed psychologist, says that the increase in the number of books on the subject has created confusion for consumers.

“Because Korea is at the beginning stages of this boom, it’s harder for the public to decipher which books are good or bad,” she said.

“Many of these books treat psychology as some sort of mind-reading technique and do not discuss the fundamental problem at hand. Instead, they provide random tips that ultimately prove useless for the reader.”

“When I was giving psychology lectures outside the school several years ago, people were saying that being a psychology expert would not be very lucrative,” Gwak said. “These days, however, I get a lot of mail from students, even elementary school children, saying that they want to become a psychologist.”

He added that companies are also turning to psychology experts to help them market and brand their products.

“I even got an inquiry from a furniture company seeking my expertise in child psychology,” Gwak said.

Professor Ha explains the growing interest in psychology by pointing to the general shift in how people perceive the world around them.

“In the past, people used to think that in order to be happy it was the world that had to change,” Ha said. “These days, we have become more individualistic and people are looking at their inner world and trying to understand it - instead of focusing so much on the world around them.”