Hana Group chief to step down ahead of KEB deal

Hana Group chief to step down ahead of KEB deal 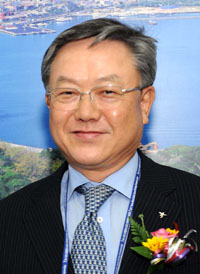 Kim told Yonhap that he is removing himself from the equation to pave the way for the two organizations to integrate smoothly. He said his image as the architect of Hana Bank’s previous acquisitions of local banks may present an obstacle to the seamless fusion of Hana and KEB.

Kim’s term official ends in March, but the financial industry originally expected him to extend his term for another year as he, along with Hana Financial Group Chairman Kim Seung-yu, led the KEB acquisition.

Before his surprise announcement, Kim was considered the likeliest candidate to succeed as chairman as he played a significant role in building the nation’s fourth-largest financial group.

The bank’s total holdings add up to 331 trillion won ($285 billion) if KEB’s assets are factored in, bringing it close to the 337 trillion won owned by Shinhan Financial Group, the nation’s third-largest player.

Although the acquisition is now within reach, Hana is under pressure to wrap it up as KEB’s former major shareholder Lone Star has set the end of next month as its deadline.