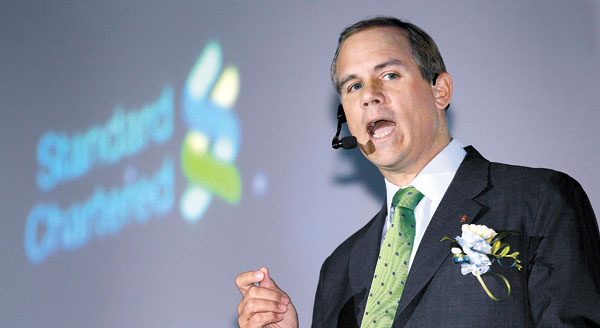 “We’ve been very conscious for some time that [...] we haven’t been benefiting enough from the success of the global bank,” said Richard Hill, president and CEO of Standard Chartered Korea, in a press conference cementing the name change.

“What [this name change] means to us in Korea is three things. First, internationally we aim to provide a bridge between Korean businesses and markets in which Korean businesses are expanding. Second, changing our name is a sign of permanence - of absolute commitment to our staff and customers. The third is growth.”

Addressing the recent issue of regulators moving to limit banks’ dividends, Hill said that SC Bank is still in an “investment phase,” having repatriated 100 billion won ($86.3 million) or less than 2 percent of its investments made in Korea to its shareholders in Britain over the last six years.

“During the last two years, some 550 billion won, with the exception of that 100 billion won, was given to the holding company, which invested the money in our consumer finance unit, savings bank, the capital company and so on,” said Hill.

After its employees’ union embarked on the longest strike in Korea’s banking history last year, Standard Chartered Bank Korea recently conducted a reshuffle. It trimmed down its workforce, with around 20 executive-level employees and 800 lower ranking employees retiring last year.

The previous name, SC First Bank, was a legacy from the bank’s previous incarnation as First Bank of Korea, which felt the brunt of the 1998 Asian financial crisis and was acquired by Standard Chartered Group in 2005.

The Korean unit was Standard Chartered’s sole overseas affiliate that formerly operated under its local name as part of the British bank’s efforts to fit into the Korean market. Some Koreans still harbor feelings of uneasiness toward overseas investors’ acquisitions of local firms.

Established in 1958, First Bank was among the five major lenders to lead Korea’s economic development during the 1960s and ‘70s, before all five were hit by the Asian financial crisis.

Old hands in the local financial industry noted that with SC First Bank renaming itself Standard Chartered Bank, all five banks that led Korea through its economic boom times have disappeared - at least in name.