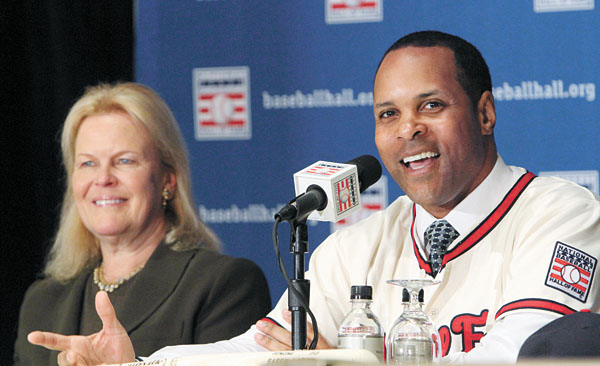 
NEW YORK - Barry Larkin, baseball’s newest Hall of Famer, is curious to see how some of the best-known players of the so-called steroids era would be treated in next year’s election.

Candidates for the class of 2013 include Barry Bonds, Roger Clemens and Sammy Sosa, players with Hall of Fame credentials who have all been linked to performance-enhancing drugs.

Players have to be retired for at least five years before they can be considered for enshrinement in the Cooperstown museum, then they have to get 75 percent of votes cast in balloting by the Baseball Writers’ Association of America.

“All I know is that playing with and competing with some of these guys, they are the best, period. I can’t wait to see [about] their candidacies.”

Larkin did not discuss individual cases but hinted he might speak out later about the candidates.

“All I can interject is what I felt about these guys as players, and if these guys in my opinion were the best during my era, I’ll let that be known,” he said. “As far as their induction, I’ll leave that up to the pros.”

Bonds, MLB’s career home-run king and a seven-time Most Valuable Player, and seven-time Cy Young winner Clemens have both been indicted by federal authorities in doping-related cases.

Sosa, whose 609 home runs put him seventh on MLB’s all-time list, has been cited as one of the 104 players who tested positive for performance-enhancing drugs in the game’s 2003 survey testing that set the stage for a drug testing program.

Eligible players who have tested positive or admitted to using performance enhancers, including Mark McGwire and Rafael Palmeiro, have so far been shunned by voters.

Jane Forbes Clark, chairman of the board of the National Baseball Hall of Fame and museum, distanced herself from the controversy about steroids-era players.

“I leave it to the baseball writers to shape our National Baseball Hall of Fame,” she said after the news conference.

Clark said accomplishments of important players, whether enshrined or not, are represented in the museum even if their reputations have been tainted by the steroids scandal.

“They are in the Hall of Fame. Their plaques aren’t on the wall yet, but their careers are certainly recognized throughout the museum. So they are part of the National Baseball Hall of Fame’s museum because they are such a huge part of the history of baseball.