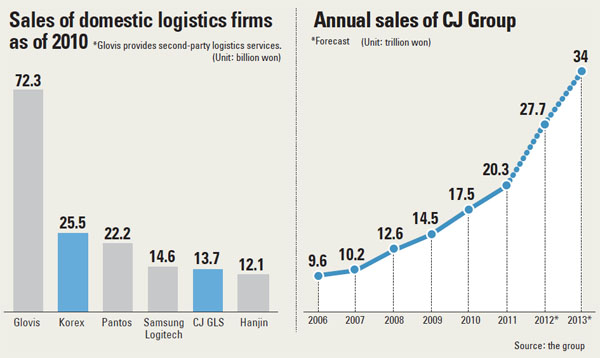 The time for CJ Group to become “global and great” seems to be just around the corner, as Korea’s 22nd-largest conglomerate has secured a powerful growth engine to help it go global.

It also set an important milestone by surpassing 20 trillion won ($17.2 billion) in annual sales. The group believes that by setting this record it has secured a solid foundation for future growth.

“The year 2011 was a meaningful one for CJ as it fully established the group’s four pillar businesses,” the company said.

Yesterday, the group named Lee Kwan-hoon, CEO of CJ Corporation, as the new chief executive of Korex, and upgraded Shon Kwan-soo from vice president to CEO of CJ GLS.

Lee Kwan-hoon, a close aide to Group Chairman Lee Jae-hyun, has built up a strong understanding of the group’s various business interests after spending most of his career there, in both the food and media divisions.

Shon, who served as the head of the three-party logistics division at CJ GLS, is considered one of the group’s logistics experts.

The nomination of such important figures to head up the logistics unit shows how highly the group now prizes this area of its operations.

The group consists of four key pillars: food and food services, entertainment and media, home shopping and logistics, and biotechnology and pharmaceuticals. However, the food business ranks as its primary concern, accounting for more than 40 percent of total sales. The logistics sector makes up about 25 percent. 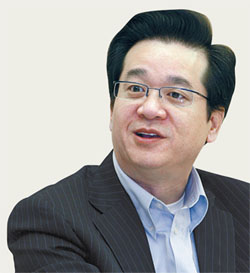 Now the marriage of Korex, which is worth 2.8 trillion won, and CJ GLS, the group’s non-listed logistics subsidiary that has assets worth 1.4 trillion, is expected to beef up the group’s weaker business unit and serve as a new growth engine.

In acquiring Korex, the CJ Group chairman made a bold move by proposing 2.2 trillion won for the takeover to edge ahead of the rival Samsung consortium.

Although CJ was financially weaker than the consortium, Lee pushed ahead with the deal based on the belief that Korex would prove vital to the group’s future growth.

Lee previously announced that the group would target sales of 38 trillion won by 2013. In order to reach that goal, reinforcements in the logistics business were required.

“By taking over Korex, CJ will be able to gain access to sea freight and port facilities, as well as specialized know-how on transportation,” the company said.

“Korex will play a central role in increasing CJ’s market dominance of its advance into other countries.”

An official at the group said it plans to build on its current momentum.

It also aims to increase global sales by up to 70 percent, he said, adding that “acquiring Korex was a kind of preparatory step to realizing this larger goal.”

Now, attention is focusing on the potential synergy that CJ and Korex can create.

CJ dreams of becoming a Korean version of DHL by enhancing its logistics unit as a key business, and has tasked itself with becoming a global logistics player. The combination of CJ GLS and Korex makes the group the No. 1 player in the domestic market.

CJ plans to combine CJ GLS’s software power with Korex’s hardware infrastructure, meaning that it is likely to keep pouring money into its IT and high-tech logistics infrastructure.

The group believes the merger of CJ and Korex will help strengthen its overall national competitiveness by reducing the logistics costs of its domestic businesses.

“Since CJ GLS and Korex have different strengths and weaknesses, the merger is likely to create some positive effects,” said Kim Dong-hwan at the company.

Combined, the two are in a position to develop a one-stop solution for logistics.

CJ in particular expects to glean additional benefits from Korex’s broad customer base, which includes the military, farms, and steel and automobile plants.