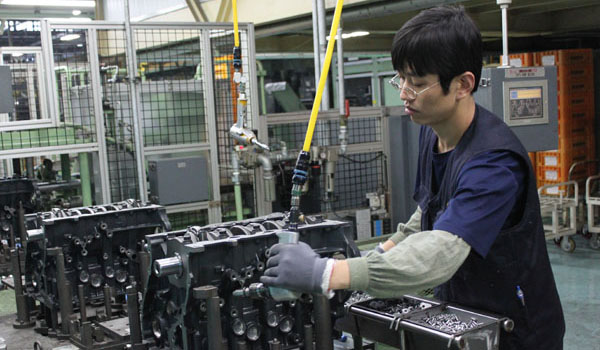 A Hyundai Motor employee assembles engine parts yesterday at the automaker’s plant in Ulsan. The country’s largest automaker resumed operations at its engine assembly line after a temporary halt due to a management-labor conflict. [YONHAP]


Hyundai Motor’s Ulsan plant resumed operations at its engine assembly line yesterday after it was hit by a labor stoppage for less than 24 hours following a violent one-man protest at the weekend.

The short strike followed the self-immolation of a 44-year-old worker, who was apparently demonstrating against being banned from engaging in union activities. The man, surnamed Shin, survived but is in critical condition at a hospital near the plant.

Operations resumed rapidly as the company’s management accepted the labor group’s demand that it take responsibility for the incident.

“We had talks with the union and promised we would improve our treatment of Shin and treat his case as though it were an industrial accident [with all the attached benefits],” said a company official. “We also decided to first discuss with the workers the issue of whether we should restrict employees from union activities.”

On Sunday, Shin attempted to burn himself while working on a production line. The union claimed it was because the company “hindered him from participating in union activities.” The labor group said Shin was ordered not leave the workplace to attend union activities.

Hyundai Motor said yesterday it will also punish whichever managers are found responsible, as well as issuing an apology for the incident once the police announce the results of their investigation.

According to industry sources, management and labor at the country’s largest automaker reached an agreement after several hours of negotiations that continued overnight to stop production grinding to a complete halt.

Although the two sides quickly found common ground, conflicts related to work shifts threaten to hamper the company’s operations for years to come.

Kia Motors, the country’s second-largest automaker and an affiliate of Hyundai, also has its work cut out in terms of improving labor-management relations. Hyundai and Kia are known for their aggressive, outspoken unions in Korea.

Last November, Hyundai Motor agreed with the union to remove all night shifts on weekdays and weekends from 2013. Under the new system, the facility plant will operate double shifts during the daytime from 6:30 a.m. to 3:10 p.m. and from 3:10 p.m. to 12:50 a.m.

The company said this will reduce the number of working hours by 4,178 per year, while also scaling back its annual vehicle production by 187,000 units.

But labor and management have yet to narrow their differences on issues such as production units per hour, and adjustments to vacations or days off. Kia Motors is also dealing with an impasse over the adoption of the double shifts.