One of these is its 55-inch organic light-emitting diode (OLED) television - naturally, the world’s biggest - as the company cements its place on the front lines of innovative, next-generation technologies and products.

Samsung, the world’s No. 1 TV maker as of 2006, is attempting to maintain its lead with OLED TVs, which are expected to dominate the market in the next few years.

However, the company has not only advanced its skills in technology and product development in recent years, but also its adroitness in terms of mergers and acquisitions.

It has beefed up its unit specializing in mergers and acquisitions over the last 12 months as the technology behemoth races to acquire more cutting-edge technology, according to recent media reports.

Not only that, but as Samsung has increased its presence and influence overseas in recent years, its M&A skills have sharpened considerably, observers say, minimizing its chances of reprising past failures.

In its annual management reshuffle and organizational shake-up that was announced last month, the world’s leading maker of flat-screen TVs and computer memory chips said it has more than doubled its M&A taskforce team to 100 people from around 40, according to media and industry sources.

In recent years, leading executives at the company have made comments implying that they are showing a new commitment to M&As.

Choi Gee-sung, Samsung’s vice chairman, said at the ceremony marking the 42nd anniversary of the company’s establishment on Oct. 31 that “Samsung should be reborn as a world-leading company that can survive 100 years by pursuing bold and aggressive M&As.”

On Tuesday, the vice chairman reiterated Samsung’s goal of achieving sales of $200 billion by 2015, which would be a new milestone in the IT industry. In order to achieve this, prudent takeovers would not just be useful but inevitable.

“We always make investments with the future in mind,” he said. “We have gone beyond electronics and now we are investing in areas like medical equipment and biotechnology,” implying further M&As may be in store for these two areas.

At a forum in Taiwan in September, he said, “If there is technology available in the area of next-generation semiconductor chips that we need, we won’t hesitate to conduct an M&A.”

Kwon, who previously served as the president of the company’s chip and display division, was promoted to vice chairman in December. He is charged with overseeing Samsung’s parts and components business.

Media reports say Samsung officials plan to pursue mergers and acquisitions with companies that have core technologies, especially in the five aforementioned fields, regardless of their size or where they are based. That strategy also aligns with Samsung’s recent attempts to bolster its software capabilities.

Critics also predict that Samsung will show more interest this year in solar cells and LEDs, two potential growth engines that it has barely developed so far. 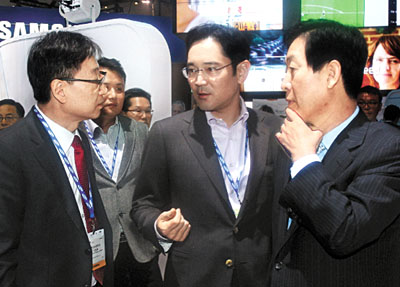 In the fast-paced world of modern technology and digital connectivity, M&As have emerged as a time-saving global trend, and Samsung appears eager not to get left behind or surrender its lead in certain fields.

Companies find it increasingly difficult to secure cutting-edge technology by relying on their own manpower and resources due to the relatively short shelf life of much of the technology. For example, they may pour all of their talent and financial resources into developing one new piece of software or hardware only to find it becomes outdated within months of its release.

“Speed has become extremely important for IT companies in order to stay in sync with fast-changing IT trends, and companies are finding M&As to be useful short cuts,” said one official at a technology firm.

Software giant Google announced last August that it would spend $12.5 billion to acquire Motorola Mobility, which makes various hardware devices in addition to having a rich portfolio of technology patents, in order to “supercharge [its] Android ecosystem.”

“The size and dollar value for this transaction is unprecedented, as was the significant interest in the portfolio among major companies around the world,” George Riedel, Nortel’s chief strategy officer and president of business units, said in a statement.

Also, rumors have been circulating for months that Microsoft may buy Nokia. In October, the Finnish mobile phone maker released its Mango smartphone that runs on Microsoft’s Windows 7 operating system.

The alliance seems like a distinct possibility as both companies are struggling in their bid to succeed with smartphones, meaning they could potentially prosper by combining their strengths.

But according to Benedict Evans, an analyst at Enders Analysis, “the only reason Microsoft would buy Nokia would be to stop anyone else from buying it,” as he told the Wall Street Journal.

Some media are also speculating that Apple, which reportedly has $76 billion at its disposal, will move to boost its acquisitions. These will likely be aimed at strengthening its operations in the entertainment industry, shoring up its patent directory and bolstering its security to keep rivals Google and Samsung at bay, Stewart Capital told Bloomberg last year.

In fact, Korean companies purchased more foreign entities than ever last year, acquiring a total of $11.2 billion worth from January to October, according to the Korea Capital Market Institute. The nation is poised to see the largest amount of outbound cross-border M&As ever, it added. 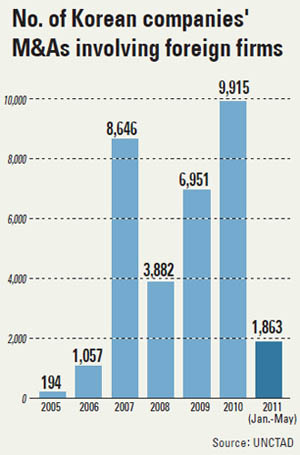 Samsung was not always so eager to chase M&As as it experienced more than its fair share of failures in previous attempts to grow its business in this way.

Just four years ago, Samsung attempted to buy SanDisk, a U.S. maker of flash memory cards, but it failed mostly due to its inexperience. Earlier, in 1995, it acquired U.S. computer maker AST Research, but many core personnel quit soon afterward, leading Samsung to resell the company.

Since then, Samsung has tended to shy away from M&As, although it changed its tune again in 2010 with the launch of its so-called future strategy unit. This is like the firm’s control tower, which was put together based on Chairman Lee Kun-hee’s order that the company needed to prepare for the coming decade. Lee reportedly requested all of Samsung’s affiliates, of which there are around 80, to find inroads into new business areas by 2020.

Further boosting Samsung’s position at negotiating tables around the world is its emergence as one of the world’s leading technology companies. In 2009, it passed Hewlett-Packard in terms of revenue to become the world’s biggest IT maker. It also has a stranglehold on a number of global markets, including flat-screen TVs, smartphones and semiconductors.

Song Jong-ho, an analyst with Daewoo Securities, said on Jan. 8 that Samsung will likely overtake Intel this year with an estimated operating profit of $18.3 billion. Intel has predicted that its operating profit will reach $17.8 billion.

Some of Samsung’s high-profile M&As last year include a deal with Dublin-based hard drive manufacturer Seagate in April. This saw Seagate buy Samsung’s hard drive business for $1.4 billion and a 9.6 percent stake in the company.

Samsung also acquired a controlling stake in Medison, a Korean diagnostic ultrasound manufacturer, from late 2010 to early 2011, outbidding rivals like SK Group, KT&G, Phillips and Olympus as it attempts to break into the health care industry.

Also early last year, Samsung completed its acquisition of Liquavista BV, the Netherlands-based display research company. This enabled it to secure original technology that it can apply to its transparent display and electronic book businesses, among other areas.