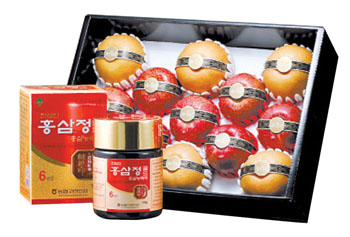 With the Lunar New Year coming up, Nonghyup has prepared various gift sets made with 100 percent Korean agricultural goods.

Mokuchon ham sets and Arumchan products are good when you are looking for a reasonable price but high quality. There are various kinds of mokuchon sets including canned hams, high quality handmade hams. These sets range in price from 10,000 won ($8.63) to 100,000 won.

For higher quality presents, hansamin and ansim hanu sets are particularly recommended. The hansamin set contains red ginseng products and is suited to the elderly as they have a keen interest in their health. These products range from 40,000 won to 300,000 won.

The ansim hanu sets include sirloin steak, ribs and oxtail. Prices start at 70,000 won and go up to 600,000 won. The Nonghyup Ansim Hanwu sets are made with ‘Nonghyup Ansim Hanwu’ which is certified by Nonghyup as being completely safe as they have monitored the entire process of raising the animal.

With so much choice it can be difficult to choose a particular gift. If this is the case perhaps a Nongchon Sarang gift voucher is the answer. The gift voucher can be used in 2,000 Nonghyup stores and branches nationwide. There are seven vouchers available from 5,000 won to 1,000,000 won. The gift vouchers can be purchased at any of the 5,000 Nonghyup branches across the nation or online at http://nhgift.nonghyup.com.