For Lions legend, a different KBO

For Lions legend, a different KBO 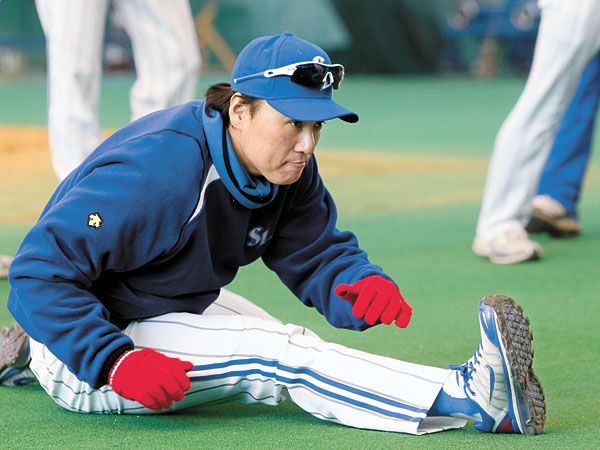 
For this upcoming Korea Baseball Organization season, the Daegu Samsung Lions’ Lee Seung-yeop said he is starting all over again despite his reputation as one of the best sluggers in league history.

The first baseman, who made his professional debut with the Lions in 1995 and played in Daegu until 2003, is considered the club’s franchise star.

Lee has won five MVP awards in his nine KBO seasons, in addition to leading the league in home runs five times and in RBI four times. Before leaving for NPB, he had a career .305 batting average, 324 home runs and 948 RBI. A highlight of his career came in 2003, when he set the all-time Asian single-season record with 56 home runs.

In NPB, Lee has played for the Chiba Lotte Marines, the Yomiuri Giants and the Orix Buffaloes. He enjoyed some success early on, winning the Japan Series with the Marines in 2005 and the Giants in 2009.

But left thumb and knee injuries have derailed his career over the past four seasons. Last year, he managed to hit only .201 with 15 home runs in 122 games with the Buffaloes. Lee’s career in NPB ended with a .257 batting average, 159 home runs and 439 RBI in eight seasons.

Wearing the blue uniform with his signature number 36, Lee attended the Lions’ opening training session on Monday to officially begin his quest to restore his elite status in the KBO. At the Gyeongsan Ballpark in North Gyeongsang, the left-handed hitter talked with Korean media about his future goals and challenges.


Q. Have you felt a lot of pressure since returning to the KBO?

A. Rather than feeling pressure, I’m a bit thrilled to have a challenge. During past years in Japan, I didn’t perform very well. ... In the professional world, second place is not worth it. I have the responsibility and duty to be a No. 1 player. I will try my best to not get left behind.

How would you respond to fans’ expectations that you will improve the Lions’ slugging power?

I don’t think the team will change by my own personal abilities. I’m not that great player anymore. For eight years, I have played on a different stage and Korean baseball has changed a lot. I need time to adjust and find what role I should play.

What about fans who expect you to hit home runs with ease like you did in the past?

As I said, I’m a challenger. I think last year’s home-run king Choi Hyung-woo or Kim Tae-kyun of the Daejeon Hanwha Eagles have a better chance of claiming the home-run title than me.

I need to start over to examine Korean baseball again. Last December, I met Choi at the training park and asked him for advice on the style of Korean pitchers. I had to start over again and I will get rid of mistakes by studying hard.

What do you think about top Korean pitchers such as Ryu Hyun-jin and Kim Kwang-hyun?

Ryu and Kim have very good pitches - even better than Japanese pitchers. I met Ryu and Kim on the national team and watched them closely during the Beijing Olympics. I just gave an exclamation of surprise, but now is not the time to just stand awed.

I’m in a position to face and overcome young pitchers because when it comes to the game, they are going to beat me in the first place. I need to prepare well and win. I’m not a genius. If I was, I should have hit .800 or better. I will prepare for the season with a study-hard attitude.

In your opinion, what has changed about Korean pitchers?

Ball control and combination have improved. In the past, when the ball count was at 3-1 or 2-0, usually a fast ball came in. But now, in that situation, pitchers are throwing breaking balls, meaning they are pitching various types of balls in a good way.

What are your thoughts on playing third in the batting line up?

When I was at my best, I was the third batter. To tell you the truth, when I look back at myself with a cool head, I’m concerned that I might not be qualified for that position. But I want to accept it with a positive attitude since both me and the team are going in the same direction to have a good season this year.

What is your goal for this season?

My first goal is to win the championship. The Lions won the title last year, but if the team doesn’t win this year, I’ll think it was my fault. Personally, I’m looking to play in every game of this season.

In Japan, I couldn’t do that. I want to show fans that I’m physically fit and mentally healthy.