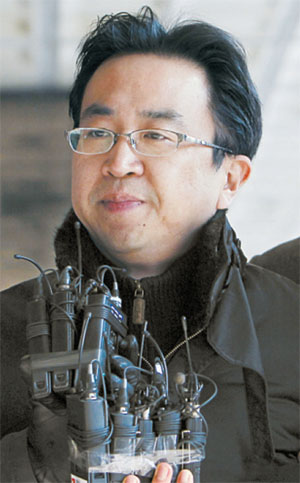 Prosecutors raided the house of a former secretary of National Assembly Speaker Park Hee-tae, accelerating their investigation of whether the former ruling party chairman paid for votes in the party’s 2008 leadership election.

They are trying to find an aide who allegedly distributed envelopes of cash to lawmakers to vote for Park as chairman of the Grand National Party.

Last week, GNP lawmaker Koh Seung-duk dropped a bombshell by saying his secretary received a manila envelope stuffed with 3 million won ($2,600) and Park’s name card on the eve of the party’s July 3, 2008 leadership election. Koh said that after he learned about the envelope a day after the election, he ordered an aide to return the money to Park’s office. The aide gave the money to Goh.

When questioned by prosecutors earlier, Koh’s secretary, who was an intern, said she didn’t know the person who delivered the envelope. She said he was in his 30s and wore black-framed glasses. She said he was carrying a shopping bag full of manila envelopes similar to the one delivered to Koh’s office.

Koh’s secretary narrowed down the suspects to four people when she saw photos at her questioning. Goh’s photo was one of the four.

Prosecutors want to find the deliveryman to find out how much money was distributed to lawmakers that day.

Goh, who is now 40, served as Park’s secretary in 2004 after he was elected to his fifth term as GNP lawmaker. After Park failed to win a GNP lawmaker nomination in 2008, Goh found a job in a different lawmaker’s office. But he supported Park’s chairmanship run in July 2008 and was a key member of his secretariat during the campaign, according to GNP officials.

Prosecutors also plan to figure out who was in charge of Park’s campaign budget in 2008.

Park, who is traveling on business abroad, had denied the allegations. Prosecutors said they will invite him for questioning after he returns next Wednesday. An aide to Park yesterday told the JoongAng Ilbo that Park hasn’t changed his schedule to return to Korea earlier.

According to an investigation by the JoongAng Ilbo and a local bank in Seoul, a typical shopping bag can carry 30 manila envelopes containing 3 million won each. Kim Chong-in, a member of the GNP’s emergency leadership council, said on a local radio program yesterday that the party needs to conduct a large-scale internal shake-up.

“As we have promised the reform of the party, we need to replace those involved in the case,” Kim said.