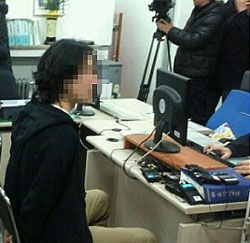 A man took a pregnant woman hostage yesterday afternoon at the Hyundai Department Store in the COEX, southern Seoul, according to police.

The Gangnam Police precinct in southern Seoul said the man, surnamed Lee, 33, took a kitchen knife from inside the store and seized a pregnant woman surnamed Kim, 37, at around 12:30 p.m., yesterday.

The police arrested Lee 30 minutes after he took the woman hostage.

A witness who works at the department store told reporters yesterday that “the man came into the store wandering around as soon as the store opened at 10 a.m. I asked him if he needed any help, but he didn’t reply.” The employee added that “a loud noise grabbed people’s attention as kitchen products on display fell to the ground when the man reached for a kitchen knife.”

Lee then took Kim by the hair and dragged her about 20 meters and yelled to the other customers in the store “I’ll kill you if you follow me!”

Another employee who works in the 7th-floor kitchenware section told the reporters that when Lee took the woman hostage “most people ran downstairs screaming and the whole building was struck with horror.”

The man didn’t request anything while he held the woman hostage.

The suspect is also reported to have tried to set a bookstore in COEX on fire 40 minutes earlier but failed and moved on to the department store.

According to police, Lee runs a blog where he expresses his discontent with society. The police are investigating whether or not Lee has any record of mental illness, and said they will issue an arrest warrant as soon as they finish their investigation.

Police added that they are investigating the case by analyzing the CCTV footage in the department store and the bookstore, while inquiring into the motive for the crime.

Police announced through its official Twitter page that “the assailant of the hostage situation at Hyundai Department Store in southern Seoul has been caught so please calm down.”

Meanwhile, concerns over the department store’s reporting structure are being voiced as Hyundai Department Store management wasn’t aware of what was going on until the police arrived at the scene. The pregnant woman is reported to have fainted as soon as the police rescued her and was taken to a nearby hospital.