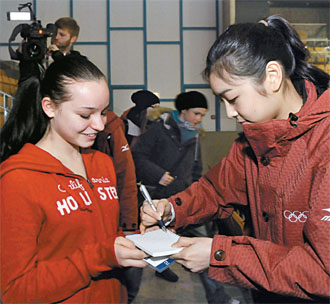 INNSBRUCK, Austria - The eyes of the sporting world may be on London for this summer’s Olympics but Innsbruck will steal the show briefly from today until Jan. 22, as it hosts the first ever Winter Youth Olympic Games.

Following Singapore’s inaugural youth event in 2010, the Austrian ski resort will welcome Olympic competitions for the third time in its history - another first - with over 1,000 athletes from around 70 countries taking part.

More than just a younger version of the Olympics - all athletes are aged 14 to 18 - the Youth Games (YOG) are also a chance for the International Olympic Committee to try out new disciplines and experiences.

All the sports featured in the senior Winter Olympics, from alpine skiing to curling and figure skating, will make an appearance, but participants will also compete in mixed-gender and mixed-nationality events.

Ice hockey will include an individual skills event - even players who fail to make it into the tournament may qualify - and female athletes will for the first time take part in ski jumping. Cross-country and biathlon teams will also compete together in a mixed relay.

“You will not only see the next generation of international winter sports stars, but you will also experience some great innovations and new formats that have never before featured in an Olympic sports program,” said IOC President Jacques Rogge, who has long championed the Youth Olympic Games. Many of the new disciplines will make their first appearance at the senior Olympics event in 2014 in Sochi, Russia.

Aside from the competitions, a tightly packed cultural and educational program has been planned to bring the athletes together, from mountain excursions and dance and drumming workshops to media labs teaching them about photography, video editing and social networks.

Tips on how to give media interviews, as well as nutrition and career advice, will also be available to help young participants navigate their competitive careers.

The 2012 Youth Olympic Games, which cost about 23.7 million euros ($30.3 million), kick off on Friday with an opening ceremony at Innsbruck’s signature Bergisel Ski Jump Arena overlooking the city.

The competitions - 63 medal events over 10 days, including 18 that are entirely new to the Olympics - will take place in the Tyrolean Ski Resort as well as nearby Seefeld and Kuehtai. In all, 1,059 participants have signed up from all six continents, including such countries rarely seen in winter sports as India, Eritrea and Peru.