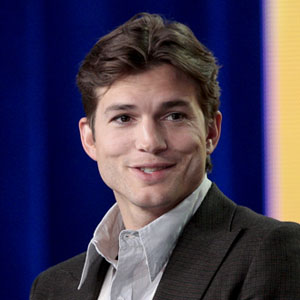 A clean-cut Ashton Kutcher said Wednesday that he’s interested in continuing with “Two and a Half Men’’ beyond this season - and CBS wants him, too.

Kutcher’s addition to television’s most-popular comedy following star Charlie Sheen’s implosion was a grand experiment that has worked out better than CBS or the producers could have dreamed.

The show is up 20 percent in viewers over Sheen’s final season, the Nielsen ratings company said, and Kutcher has also brought in a younger crowd.

“I’ve had a blast,’’ said Kutcher, who plays the heartbroken Walden Schmidt. “Since I stopped doing ‘That ’70s Show’ I’ve always wanted to go back and do television.’’

Kutcher appeared at a news conference without the long hair and beard he has worn this season. It was cut as part of the plot in an episode of “Two and a Half Men’’ that airs Monday, he said.

Kutcher will be working on movies after filming for this season of “Two and a Half Men’’ concludes, but “Right now I’m looking at it as a hiatus,’’ he said.

CBS would have to strike a new deal with actors and producers to continue the show beyond this season. All parties seem interested in working it out, CBS Entertainment President Nina Tassler said.

“In spirit and intent, everybody is very motivated,’’ she said.

Series creator Chuck Lorre said he gave thought to ending the series after Sheen left last season and couldn’t imagine it continuing. But CBS and his co-creator, Lee Aronsohn, nudged him to continue.

Writers were able to change the tone by making Kutcher’s character a heartbroken Internet billionaire who has everything he wants except the woman he loves.