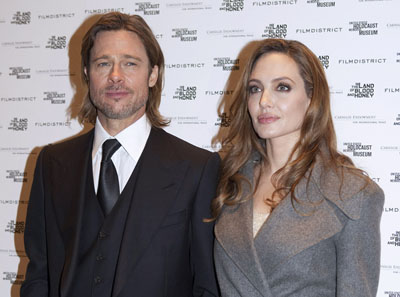 U.S. President Barack Obama took a break from the affairs of state to rub shoulders with Hollywood royalty Wednesday, meeting Angelina Jolie and her beau Brad Pitt at the White House.

Jolie was in Washington for the launch of her new movie “In the Land of Blood and Honey,” and the couple was seen through the paneled windows of the Oval Office by reporters and photographers.

“President Obama spoke with Ms. Jolie about her work to raise the profile of preventing mass atrocities and combating sexual violence against women,” said Jamie Smith, a White House spokeswoman.

Jolie, in a dark dress, and Pitt, wearing black-framed glasses, spent several minutes speaking to Obama before he left aboard his Marine One helicopter for a campaign fund-raising trip in Chicago.

The Oscar-winning actress premiered the film, her directorial debut, at the Holocaust Memorial Museum in Washington on Tuesday night.

The movie relates the story of a couple who had a fling before Bosnia’s 1992-95 war and met up again when the woman was taken prisoner by a unit of the Bosnian Serb forces commanded by her former lover.

He shields her at first but is transferred, and she suffers abuse and rape at the hands of the soldiers.

At the premiere, Jolie, who as well as her film work pursues a wide range of humanitarian causes as a UN goodwill ambassador, offered a mixed review of Obama’s presidency.

“I think there are many, many things I think have gone in a wonderful direction, and there a few things I am in disappointed in,” she told the Daily Caller Web site. “But there are many wonderful things that have moved forward, and of course, some other things that are very frustrating.”