Super Junior triumphs on day one of Golden Disk Awards

Super Junior triumphs on day one of Golden Disk Awards 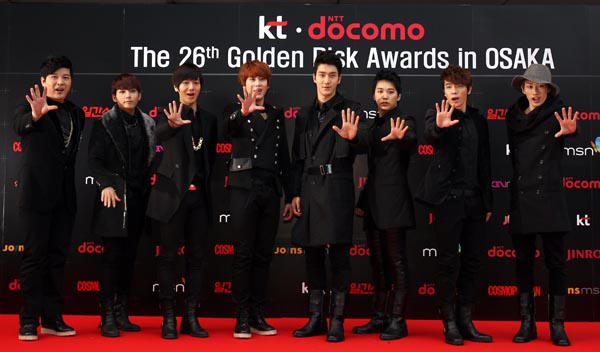 When evening’s festivities got underway at 6:30 p.m., some 26,000 fans aged anywhere from 10 to 40 began screaming out the names of their favorite K-pop acts.

The two hosts of the show were in for a surprise as they were clearly the winners of the night.

The crowd at the dome went wild as Super Junior stepped up to take home the grand prize for its fifth album “Mr. Simple” as well as the main award, most popular artist award and a special award from MSN Japan. Mr. Simple sold 479,329 copies and it was the second time the band received Grand Prize, following a win in 2009 for “Sorry Sorry.”

Meanwhile girl group Kara tasted its first victory at the award show taking home a grand prize for selling 100,000 copies of its third album “Step” as well as being crowned “Best Hallyu Star.”

“We just want to thank our fans who are always there for us like sunflowers to the sun. We dedicate tonight to our fans and we promise that we’ll keep doing our best to make music that will being smiles on faces of all who are going through tough times,” said Leeteuk.

As well as the award ceremony, performances by various acts thrilled the Japanese fans that turned up to see their favorite idol groups. The fans sang along to the tunes in Korean, prompting Leeteuk to joke, “I don’t know whether I’m in Korea or Japan.”
The annual Korean music award show hosted by JTBC
began in 1986, is different from other award shows that focus on bands’ popularity rather than on their achievements.
Carla Sunwoo [carlasunwoo@joongang.co.kr]