Though predictable, ‘Zoo’ still manages to pull off poignancy

Though predictable, ‘Zoo’ still manages to pull off poignancy 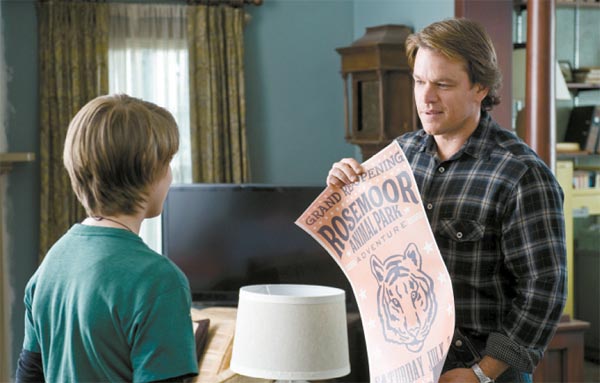 Still struggling to move on after the death of his wife, Benjamin (Matt Damon, right), quits his job and moves the family to a rustic house that comes with a zoo. Provided by 20th Century Fox


Sometimes, reacting to a movie is all about the expectations you bring with you walking into it. “We Bought a Zoo” (2011) is about a family that buys a zoo. It’s as high-concept as you can get, outside of maybe “Attack of the Killer Tomatoes” (1978) or “I Now Pronounce You Chuck and Larry” (2007), and it’s equally straightforward in wearing its heart on its sleeve.

We know to expect this ahead of time because “We Bought a Zoo” comes from Cameron Crowe, the writer-director of “Say Anything ... ” (1989), “Jerry Maguire” (1996), “Almost Famous” (2000) and, more recently, the 2005 flop “Elizabethtown.” We know there will be some poignantly phrased life lessons in store for this family as they struggle to reconnect after the mother’s death.

The whole exercise could have been agonizingly mawkish, and/or filled with cheap, lazy animal-poop jokes. And yet, it’s not. It’s actually surprisingly charming and more emotionally understated than the material would suggest, and a lot of that has to do with Matt Damon’s performance. He is an actor incapable of faking it, one who cannot mail it in, and so he brings great authenticity and gravitas to the role of Benjamin Mee, a widower and father of two. (“We Bought a Zoo,” which Crowe co-wrote with Aline Brosh McKenna, is based on a true story with some tweaks.)

Six months after his wife died of cancer, Benjamin is struggling to move on. He’s having trouble dedicating himself to his career as a Los Angeles newspaper columnist and finds himself squabbling with his troublemaking teenage son, Dylan (Colin Ford); meanwhile, his younger daughter, Rosie (Maggie Elizabeth Jones), is an impossibly adorable angel.

Benjamin thinks a change of scenery might help, so he quits his job and moves the family to a rustic, rambling house on 18 acres outside the city. Seems perfect - except for the fact that the land includes an animal park that has fallen into disrepair. Since Benjamin is a writer and not a zoologist, he has no idea what he’s doing. He gets some help from the park’s ragtag, hippie crew, led by Scarlett Johansson as the hottest zookeeper on the planet.

Moving to a zoo - spoiler alert! - eventually helps everyone reconcile. No big shocker there. And no, this does not occur through the mystical power of the animals radiating positive vibes to the universe. The lions and tigers and bears are mercifully free of cloying anthropomorphism. Basically, father and son are just stuck in the middle of nowhere and the necessity for teamwork thrusts them back together. Dylan also makes friends with the only other kid his age on the grounds, the ebullient Lily, played by Elle Fanning.

Yes, “We Bought a Zoo” is sentimental and overlong, and full of obligatory fish-out-of-water physical humor. But everyone is so good in it - especially Damon, who brings real emotional truth to his character’s grieving process - that it’s hard not to be won over. Johansson has a no-nonsense likability about her performance, and the suggested romance between her character and Damon’s, while easy to predict, isn’t milked for easy heart-tugging.

It’s a beautiful film, too: Everything is bathed in this sort of magical sunlight, the work of cinematographer Rodrigo Prieto (“Brokeback Mountain” (2005), “Lust, Caution” (2007)), which enhances the sensation that anything is possible. This is the first feature from Crowe since the heavy-handed, overly quirky “Elizabethtown,” and while it’s not a complete return to form, it’s close enough.