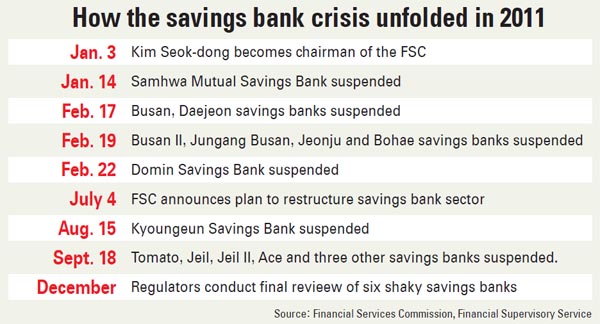 Tomorrow marks the one-year anniversary since the beginning of the savings bank crisis that ripped through the country last year, which kicked off with the suspension of Samhwa Mutual Savings Bank on Jan. 14.

Since then, the beleaguered sector has faced more than its fair share of trials, tribulations and heavy-handed restructuring, with 15 more savings banks suspended, over 27 trillion won ($23.3 billion) in sector assets gone, and more than a million customers at a time being blocked from accessing their deposits.

Such a trial by fire has inevitably altered the landscape of the domestic savings bank sector.

Now a handful of financial holding companies and others including Hyundai Group have purchased 10 of the ailing lenders, creating room for the new owners to emerge as dominant forces in the market. Meanwhile, savvy customers are increasingly keeping their savings bank deposits under the government’s guarantee threshold, while the high deposit rates once equated with the sector have all but disappeared.

However, the crisis is not yet over, as all six savings banks that received a provisional pass during last September’s wave of suspensions must still survive a final evaluation this year. Failure would result in suspension or restructuring.

Over the last 12 months, customers’ trust in the savings bank sector has been fundamentally shaken by waves of suspensions that felled an average of four institutes each quarter. This triggered several bank runs as savers feared losing their deposits, and uncovered a well of corruption running deep through the industry.

Now history appears to be repeating itself as Korea’s leading banking groups return as owners of the suspended savings banks.

Before 1997, commercial banks often owned small mutual savings and financial companies - later renamed savings banks - but the chaos of the Asian financial crisis caused many to be sold or fail. Now financial holding companies have jumped in to fill the ownership vacuum, with KB, Woori, Shinhan, Hana and BS all acquiring savings banks within the last year.

They are expected to stabilize the sector and rebuild trust with the public by using the massive amounts of capital at their disposal, as well as their brand power, to turnaround the ailing banks. Industry observers cite Woori FG Savings Bank, formerly Samhwa Mutual Savings Bank, as a successful model given its renaissance after being acquired by Woori Finance Holdings last March.

“Our strategy of attracting customers who fail to qualify for loans at commercial banks, as well as our moves to lend large sums in conjunction with commercial banks, have been effective so far,” said a Woori employee.

But the aftershocks of last summer’s purge may once again throw the sector into turmoil as six savings banks that escaped being suspended are having their cases reviewed by the Financial Supervisory Service to see whether they have made good on their promises. Those with dangerously low BIS capital adequacy ratios may yet be suspended.