Chaebol vow to ramp up investment to create jobs

Chaebol vow to ramp up investment to create jobs

Knowledge Economy Minister Hong Suk-woo, fifth from left, is pictured with high-ranking officials from 30 business groups at a conference held at the Renaissance Hotel in Yeoksam-dong, southern Seoul, yesterday. [YONHAP]


Korea’s 30 largest businesses vowed yesterday to increase their combined investment this year to a record high to help create more than 120,000 jobs and keep the country’s economy growing, the government said.

The companies pledged a total of 151.4 trillion won ($130.7 billion) in combined investment and said they would hire 123,000 new workers, the ministry said.

“The top 30 business groups pledged to take aggressive investment measures despite worsening conditions to help turn this time of crisis into one an opportunity,” the ministry said in a press release. 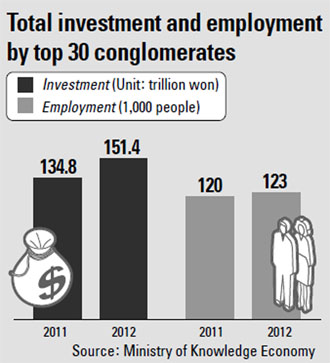 “Such measures include plans to expand their investment by 12.3 percent and employment by 2.2 percent from last year, despite the European debt crisis and concerns of an economic slowdown in the United States.”

The businesses also vowed to increase investment in new areas such as the green energy sector, which are expected to become new growth engines for Korea, according to the ministry.

The groups unveiled a number of large projects planned for this year. These include the development of next-generation memory chips, the expansion of production lines for system chips and OLED display panels, the establishment of faster fourth-generation LTE (long-term evolution) networks for smartphones and other devices, and the development of environmentally friendly vehicles.

The steel sector promised to make investments in increasing FINEX lines, while the energy sector said it will pour funds into commercializing wind farms, recovering the photovoltaic and polysilicon markets, and developing lithium-ion batteries and thin film solar cells.

To this end, they asked the government to help create an environment that will encourage and attract more investment by businesses in these new fields. Such efforts include the building of more infrastructure, such as recharging centers for electric vehicles, as well as tax breaks for R&D investment.

Hong said the government will do its utmost to remove any red tape that may hinder investment by private companies.