GTR back with a vengeance and a sportier look

GTR back with a vengeance and a sportier look 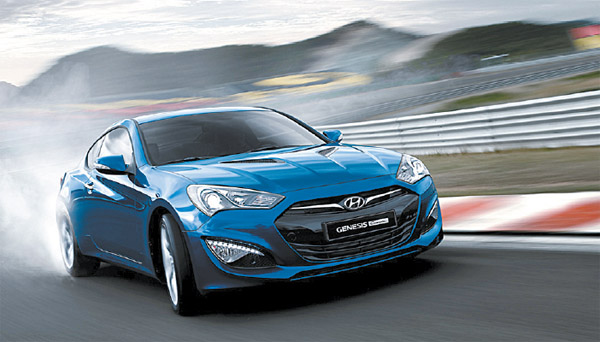 The new Genesis Coupe GTR has enough power to satisfy even the pickiest of drivers, making it a competitive alternative to pricier imports. Provided by Hyundai Motor


With the release of the high-performance Genesis Coupe GTR, the popular sports coupe has returned with a vengeance, featuring a stronger design and a souped-up engine. The second-generation Genesis Coupe, which was launched two months ago, is the closest thing to a sports car made by local companies, and acts as a de facto barometer of just how far Hyundai has come since the original debuted three years ago in October 2008.

The new coupe retains the same hexagonal grille favored by other Hyundai models, such as the i30 and i40. It stretches down through the bumper to evoke memories of certain Audi models, and stands at the core of the automaker’s new emphasis on its “fluidic sculpture” design concept, which is also characterized by the vehicle’s sharp body lines.

With the addition of its rectangular LED headlamps, the new coupe looks sportier and more modern and muscular than its predecessor, with the front and side lights giving it more of an edgy feel. The rear remains are largely unchanged from the first Genesis.

Once you step inside, the black and orange leather seats create a new sense of luxury while the steering wheel, which is covered in stitched leather, adds refinement. 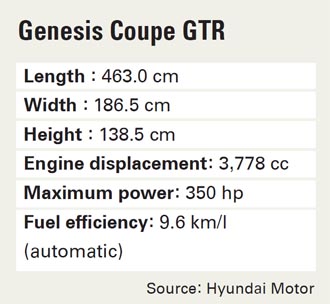 The center of the dashboard features three analogue gauges displaying torque, acceleration and the temperature of the engine. With their rounded edges, they further enhance the car’s sporty feel.

Other than that, the interior does not have much character of its own and is similar to other Hyundai models. I wished the designers had gone further and applied the concept of the analogue gauges to the main instrument panel. If Hyundai is serious about making a sports car, there is clearly still work to do regarding the interior decor.

When I took the GTR out for a spin, it quickly became apparent that the power at my disposal was of a kind rarely found in other Korean passenger cars. The 3.8-liter Lambda GDi engine can produce 350 horsepower - over 10 percent more than the previous model - and enough torque to get from 0-100 kilometers per hour (62 miles per hour) in just 5.9 seconds. Getting up to 200 kilometers per hour is also surprisingly easy. Hyundai uses the same engine for its two luxury sedans, the Genesis and Equus.

The carmaker also added a sound generator to eliminate the scratchy engine noise and make it sound more pleasant, and the roaring sound of the engine adds to the fun while driving. But the Genesis Coupe really becomes enjoyable, and comes into its own, when driven at higher speeds.

A number of reviewers have pointed out that the steering is a little heavy, and this was certainly the case for the model I drove. I almost thought I needed to adjust the steering wheel.

As heavy as it was, however, at no point was it unresponsive when navigating corners. I thought it was a little difficult to drive because of the stiffness, but this got better as I adjusted to the vehicle.

Most coupes have low backseats and the Genesis Coupe was no exception. The ceiling was a little low, but that is also to be expected from a coupe.

The new Genesis Coupe is available in four versions, starting with the 2.0-liter Turbo D that costs upwards of 26.2 million won ($22,625), depending on options. The GTR retails for 37.5 million won.