Gov’t agonizing over how to scale back oil imports

Gov’t agonizing over how to scale back oil imports 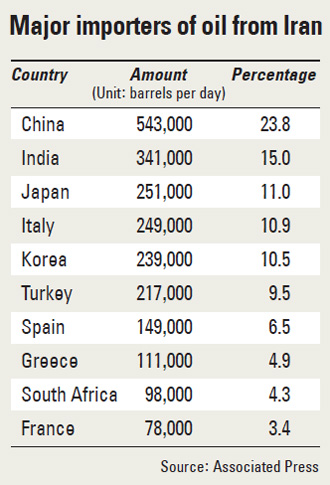 The administration of President Lee Myung-bak needs to make up its mind quickly on exactly how it plans to cooperate with Washington on the matter of cutting oil imports from Iran as Robert Einhorn, the U.S. State Department’s special advisor for nonproliferation and arms control, is due to visit Korea on Monday.

Local media reports claimed Seoul is considering halving its oil imports in response to calls from the U.S. to participate in United Nations-led sanctions against Iran’s alleged nuclear proliferation activities, but various ministries subsequently refuted these.

This has left local officials agonizing over how to pacify those leading the campaign to impose sanctions while also satisfying Korea’s energy needs. Iranian oil accounted for 9.7 percent of the country’s crude oil imports last year, and Korea ranks as Iran’s fifth-biggest importer of crude.

Now even regional pressure is mounting on the government as Japan said on Thursday it will quickly reduce its oil imports. U.S. Treasury Secretary Timothy F. Geithner won backing from Japan, the fourth-biggest importer of Iranian oil, after China decided not to follow suit.

“We want to take concrete steps to reduce our share in an orderly way as soon as possible,” Jun Azumi, Japan’s minister of finance, said in Tokyo after meeting with Geithner on Thursday. “The world cannot tolerate nuclear development.”

However, there seems to be a consensus within the government that Korea needs to take action - if only as a form of courtesy to its long-standing ally. They believe that scaling back oil imports is inevitable as failing to do so would make the country ineligible for waivers or exceptions from the sanctions, putting it in a position where it could not rely on Iran for any of its oil needs.

“To protect local companies, some kind of adjustments need to be made,” Kim Sung-hwan, minister of foreign affairs, said on a visit to Camp Casey in Dongducheon, 40 miles (64 km) north of Seoul, yesterday.

Kim was speaking of how the sanctions, approved by the U.S. Senate in December, may bar foreign financial institutions and companies that conduct business with Iran’s central bank from operating in the United States.

At present, both Hyundai Oil Bank and SK Energy ship oil in from Iran. Implementing a sudden suspension is problematic due to the existence of long-term contracts.

When asked how much the government intends to slash oil imports from Iran, Kim said, “Local companies will make a decision after weighing how much they would lose if they continue trading with Iran.” He also denied reports that the level of imports could be halved.

The government is expected to offer to gradually trim its oil purchases, and is now exploring ways of diversifying its sources, a topic Prime Minister Kim Hwang-sik is due to raise during his ongoing swing through Oman and the United Arab Emirates. “It’s not easy to cancel existing contracts with Iran,” said a government official.