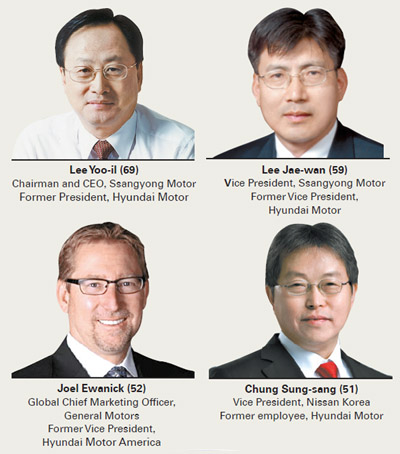 Retired Hyundai Motor executives are in hot demand and are increasingly pursued by rival automakers keen to emulate the Korean company’s success.

According to industry sources, GM Korea, the local unit of General Motors, has recruited a former high-ranking employee as its executive in charge of domestic operations after spending weeks scanning the resumes of former and retired Hyundai officials. However, GM has not yet officially revealed the new manager’s name.

“Anyone responsible for a company’s domestic operations needs to be very well-versed in the local market and environment, and former Hyundai Motor employees certainly fit the bill,” said one industry official.

The country’s largest automaker, which was founded in 1967, has emerged as the world’s fifth-largest vehicle producer after shoring up its brand image both at home and abroad in recent years.

It accounted for more than 43 percent of the domestic auto market last year, up 3.6 percent from 2010, followed by its affiliate Kia Motors. Hyundai enjoyed more explosive growth overseas last year, with global sales jumping 12.3 percent on-year for a total of 4.05 million vehicles sold.

U.S.-based General Motors, Japan’s Nissan and even domestic rival Ssangyong Motor are now turning to seasoned staff from the carmaker to beef up their sales and marketing teams as they chase similar levels of growth.

Younger executives are claimed to be much harder to poach due to Hyundai’s highly competitive remuneration packages.

During the global financial crisis in 2008, Ssangyong suffered a financial crunch that led its former parent company, Shanghai Automotive Industry Corporation, to abandon the automaker as sales of sport utility vehicles plummeted.

The company was put under court receivership in February 2009 and was purchased by India’s top SUV manufacturer, Mahindra & Mahindra, last August.

During such turbulent times, Lee Yoo-il, who spent 30 years at Hyundai until 1999, became Ssangyong’s president and chief executive officer last February, two years after joining the company as a manager when it was under court receivership.

With Lee at the helm, Ssangyong is seeing a slow recovery in sales. Last week, the automaker said it aims to sell 123,000 vehicles this year, up a whopping 38.2 percent from 2011.

Lee said the company must devise “outstanding marketing strategies and plans to make inroads into emerging markets.” And he knows what he is talking about, having spent years in charge of Hyundai’s overseas sales and marketing.

Choi joined Hyundai Motor in 1977 after studying business administration at Seoul National University and was recruited by Ssangyong early last year. Song also started his career at Hyundai before joining Ssangyong last May.

Meanwhile, Nissan Korea followed suit by recruiting another Hyundai retiree, Chung Sung-sang, as its sales and marketing vice president last year. The Japanese automaker, in charge of both the Nissan and Infiniti brands, said Chung was scouted for his abundant experience in strategic sales and marketing, gleaned from his positions at Hyundai and Toyota.

The automaker, said Chung, “has experienced in both the domestic and overseas automobile markets and brands and will allow Nissan Korea to strengthen its presence in the Korean market.”

Moreover, foreign carmakers and staff are also cottoning on to the benefits to be had from using Hyundai as either a talent pool or a springboard to advance their careers.

Joel Ewanick was appointed as GM’s global chief marketing officer in December 2010 after he made his name working for Hyundai Motor America as its vice president of marketing. In between, he spent a stint with Nissan’s North American operations.

“He is the right leader to take GM’s marketing strategy to the next level,” GM Chairman and CEO Dan Akerson was quoted as saying back when Ewanick was hired.

“As we continue our rapid growth in major global markets, it is important that we take a more customer-focused view of our overall marketing strategy,” he added.

And Philip Jack, who created Hyundai’s fluidic design for its representative sedans, also returned to GM recently to work on product design.

While retired Hyundai executives are enjoying a heyday of sorts, competition to join the carmaker is becoming increasingly fierce among young graduates, with foreign students also showing greater interest.

“I’ve been studying in Korea since September as an exchange student,” said Paulo Hideyuki Nakai from Brazil, who is majoring in control and automation engineering. “My plan is to study Korean language and then try to get an internship at Hyundai Brazil.”

The company said an average of 30 people apply for every office job posted in Korea, with more applying for production jobs, making them among the most sought after in the domestic auto industry.