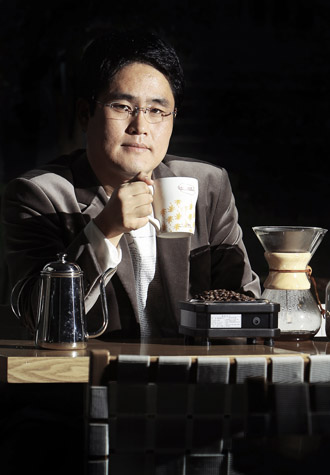 Kim Eun-sang, who runs a Hawaiian Kona coffee farm, received a “Cupper” certificate in 2010 from the Specialty Coffee Association of America. By Kim Tae-seong

Over the years, the coffee industry in Korea has grown, with consumers becoming more and more interested in the various blends available worldwide. Among numerous types of coffee, Hawaiian Kona, Jamaica Blue Mountain and Yemen Mocha coffees are three internationally acclaimed types. Although the price can be four to five times more expensive than other coffees, the taste and quality is unrivaled.

As the name suggests, Hawaiian Kona coffee comes from Hawaii, the only state in United States that can cultivate coffee. In 1825, John Wilkinson took the Kona coffee seed to Hawaii and it became one of Hawaii’s most popular drinks. Kona coffee is a symbol of Hawaiian pride and a major source of income for the state.

In order to improve the quality of Kona coffee and maintain the tradition, the Hawaii Kona Coffee Cultural Festival is held once a year at Hawaii Island or Big Island. For 10 days straight, several events take place, including the famed Cupping Competition. At the Cupping Competition, cosmopolitan panels officially select the coffee of the year.

In Hawaii, a Korean immigrant - Kim Eun-sang, 44 - owns a Hawaii Kona coffee farm. On a visit to Korea for his coffee business, the JoongAng Ilbo sat down with Kim for an interview.

Kim went to Hawaii in 1998 for a job at an educational foundation. His boarding house cultivated Hawaiian Kona coffee, which exposed Kim to the process and provided the opportunity to become extremely familiar with the coffee.

“Every morning, I could smell the coffee roasting, which made me interested in Hawaiian Kona coffee,” Kim recalled. By 2000, he purchased the coffee farm from the boarding house owner.

After buying the land, Kim realized the soil was much more barren than other places. He decided to become a “coffee hunter.” Kim grew the coffee in other lands and eventually took his brew around the world.

In 2010, the Specialty Coffee Association of America acknowledged Kim and he received a “Cupper” certificate. This certificate is awarded to people who can evaluate coffee by taste and smell and know the coffee type by only seeing the coffee bean.

According to Kim, as the coffee industry grows the source of coffee beans will become an important part of the selection process, similar to the wine industry.

“Although the type of coffee and the cultivation area are the same, the price of the coffee varies according to the coffee bean,” Kim said.

As drinking coffee became a culture of its own, coffee lovers became more particular in selecting brews from developed countries. “The culture of drinking coffee is growing rapidly in Korea and people will soon start to consider which farm has cultivated the coffee,” Kim said.

The price of international coffees is expected to rise, Kim added. “Chinese and Indians are starting to drink coffee, which means billions of people are drinking coffee. As the demand increases, the price will eventually rise as well.”

The last tip Kim has for coffee lovers in Korea is to avoid buying coffee beans that have been roasted over two months ago, since the taste and smell will not be guaranteed.