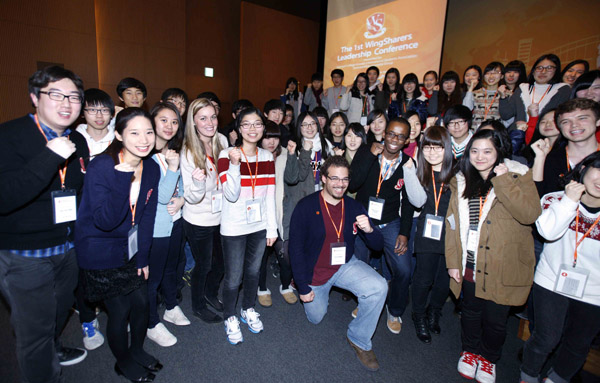 
A high school student stood in front of a group of Harvard University undergraduates and professors at Hanhwa Human Resources Development Center in Gapyeong, Gyeonggi, yesterday, to talk about the role of a leader.

“A leader turns dreams into reality,” said the student at the end of the presentation. One of the Harvard undergraduates applauded and said the speech was “wonderful.”

After the speech, students formed groups of ten and began discussing what they thought about leadership.

They were attending the second day of the “1st Wing Sharers Leadership Conference,” an education donation program organized by Harvard University’s international student body and sponsored by Hanhwa Group.

According to the Hanhwa Group, Harvard students will be mentoring Korean high school students on topics including global leadership, creativity development and the study guide for Harvard students.

“In Korea, students are spoon-fed in schools,” said Park Ji-yeon, 17, a student from Gyeonggi Global Tongsang High School. “But here, I am learning so much from other students through the U.S.’s discussion-style education.”

Park, who sees herself working at the Secretariat of the UN in the future, said she has been volunteering at UNICEF since August.

Yim Ju-won, 16, from Seoul Global High School also gave a thumbs up when the group discussion was over.

“After listening to a lecture about public speech, I have learned that it is important for a leader to acquire skills to convince people and to speak to people’s hearts,” said Yim. “I want to work for non-government organizations in the future and it is my dream to establish a society that becomes happy by sharing.”

Yim established a club at her school that engages in donation projects, in which students donate unwanted or unused stationery to a third-world country. She said currently nine schools across the country are participating in the donation project.

Cho Mun-sun, 16, from Hankuk Academy of Foreign Studies said, “I want to establish a society that acknowledges people who work hard regardless of their social and financial status,” and added that she wants to enter Harvard University and become an environmentalist like Al Gore.

The four-day conference, which is offered for free, attracted about 1,000 student applicants throughout the country. The conference, however, was only able to select 80 students through two document screenings and a phone interview, according to Hanhwa Group.

Most students at the conference were from lower income households who showed a willingness to learn about leadership and passion to overcome their hardships by learning.

“We hope to vitalize this Wing Sharers Leadership Conference and continuously put our focus on donating for education and development of educational environment in Korean high schools,” said Moon Seok, vice president of Hanhwa Group.