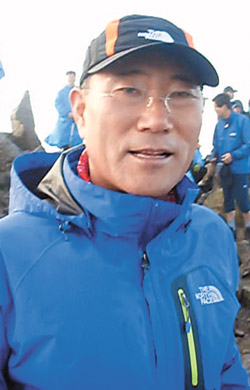 Park Jong-won, the CEO of Korean Re and famed for his “mountain management,” will climb Mount Everest with his employees in May. After conquering the mountains of Korea, Park and his insurance company will embark on a journey to the top of the world’s highest mountain.

Korean Re said the president and 10 executives and employees are planning to go on a hiking trip for 10 nights and 11 days to reach the peak of the 8,848-meter-tall mountain in May.

“The Everest trip is being planned to mark the successful completion of climbing mountains,” an official at the company said. “Our goal is to raise the spirits of challenge, innovation and corporate values.”

The members of the Everest hiking expedition will include employees from all levels including entry-level workers and senior executives.

Park, who served in the Marine Corps, started climbing with employees in 2004. Every year, all employees of Korean Re carry 15-kilogram (33-pound) backpacks and go on 40-kilometer (25-mile) hiking trips. They do not stop even when torrential rains pour down.

When Park proposed the idea, many workers complained, afraid of going on tough trips. Some were even critical of the president’s leadership, comparing it to the military culture.

However, when the first hiking trip to Mount Jiri was completed successfully, such complaints disappeared. Individual employees felt growing confidence and started talking about their heroic expeditions on the mountains.

They climbed Mount Deokyu in 2005, Mount Sokri and Sobaek in 2006, Mount Taebaek in 2007, Mount Odae in 2008 and Mount Seorak in 2009. From 2010, they embarked on a second round of trips, starting with Mount Seorak and finishing with Mount Jiri. Korean Re employees conquered the tallest mountains in the country.

When Park joined Korean Re as president in 1998, the company was about to shut down. Complacency ran deep in the organization. Blaming market conditions, its growth goal was zero percent at the time.

Park started by trimming the bloated organizational structure, cutting the workforce by 30 percent. He also set a goal of 10 percent growth. He adopted the hiking program to encourage employees to have goal-oriented ambitions.

As the organizational culture changed, the company’s performance markedly improved. Sales per employee rose from 6.2 billion won ($5.4 million) in 1998 to 16.8 billion won in 2010. The net profit for the term per head also jumped from 20 million won to 400 million won.

Korean Re, which ranked 28th in the world reinsurance market in 1999, rose to 11th place.

In recognition of his contributions, Park is serving his fifth consecutive term, becoming longest-serving CEO in the financial sector.