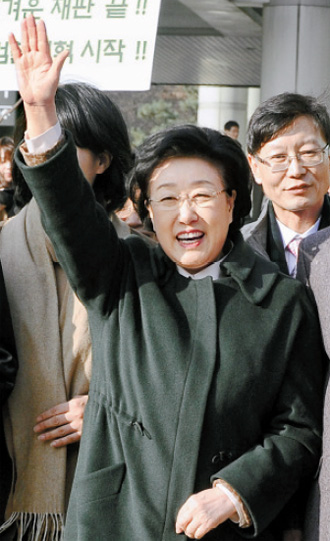 The Seoul High Court issued yesterday a verdict of not guilty to Han, who was indicted for allegedly receiving $50,000 in bribes from Kwak Young-wook, former CEO of Korea Express in 2006. Han was indicted in December 2009 for this bribery charge but was acquitted during her first trial on April 9, 2010.

“Truth and justice have won,” said Han yesterday upon being ruled not guilty of one of her bribery charges. “I am so happy and I thank the judicial branch and the public who believed in the truth that I did not live such a life.”

Han has been involved in two separate bribery cases since last year.

Her other bribery charge, which she was acquitted of on Oct. 31 last year, was on charges of receiving 900 million won ($781,000) from Han Man-ho, the former head of construction company Hansin Gunyoung in 2007.

The Seoul High Court, however, sentenced Kwak, who was indicted along with Han, to two and a half years in prison with four years of probation for embezzling $55,000 of company funds, but acquitted him of the bribery charge, yesterday.

The justice department of the Seoul High Court said, “Kwak had changed his testimony and most of it was not even from his definite memory,” adding, “as there are doubts over the credibility of Kwak’s testimony, we cannot judge that Han is guilty.”

During Han’s first trial, the court also issued a not-guilty verdict to Han stating that “the only first-hand evidence, which is Kwak’s testimony, lacks credibility.”

Han told the reporters right after her trial yesterday that “prosecutors should no longer be the tools of authority but should stand upright as the prosecutors for the public,” and added that she will “take the lead in fighting for the prosecutors to play their proper role to work for the people.”

Upon getting acquitted from the bribery charge of receiving 900 million won ($783,900) last October, Han resumed her political activities straight away and officially announced last December her running in the leadership election of the main opposition Democratic Unity Party.

Analysts say it is highly likely that Han will be elected the leader of the DUP as she was able to clear the suspicions of the public with the not-guilty verdict she received yesterday.

The voting results of the DUP’s leadership election will be out tomorrow.

“I hope the public leadership election will happen in a festive mood,” said Han.