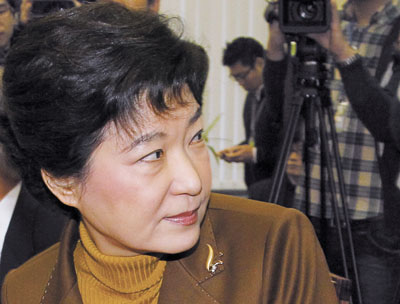 Park Geun-hye, interim leader and a presidential front-runner of the Grand National Party, presides over an emergency council meeting yesterday to decide several controversial issues about the party’s identity. [YONHAP]

In an attempt to stop the widening of an internal rift in the Grand National Party, its emergency leadership declared yesterday it would maintain its “conservative” identity, ending a recent tussle over the idea of dropping the term from the party’s platform and policies.

Representative Park Geun-hye, the GNP’s presidential front-runner and interim leader, also issued a stern warning to party heavyweights resisting reform efforts within the beleaguered party and said senior politicians must stop trying to challenge the emergency council. Park also warned reformists yesterday that the GNP will not disband and reconstitute itself.

A plan to remove the word “conservatism” from the party platform and policies was presented last week by the emergency council led by Park. The plan, intended to appeal to centrist voters ahead of the April 11 legislative elections, faced fierce resistance from the party’s senior members.

“It is necessary for the party to redefine its core values to accommodate the changes of our times,” Park said yesterday. “But it is undesirable to have the discussion about the term ‘conservative’ amidst the ongoing reform efforts.”

Representative Hwang Young-cheul, the party’s spokesman, confirmed that the emergency council had decided at a meeting yesterday to put an end to the discussion. “The decision was that we will not remove the term,” Hwang said.

Kim Chong-in, a member of the emergency council who first proposed dropping the term “conservative,” appeared to be sour about the decision but told reporters he would accept it.

The GNP will have a meeting with its emergency council members and lawmakers on Tuesday to discuss other reform efforts, including a plan to revise the party’s platform and policies. With yesterday’s decision to keep its conservative identity, the discussion will largely focus on less sensitive changes. A flexible North Korea policy and other proposals such as fairer competition and economic justice are to be included in the revised platform and policies.

Before yesterday’s meeting of the emergency council, Park made clear that she won’t allow any more discord among the party members.

“Let’s think about why the emergency council was launched,” Park said yesterday at the leadership meeting. “We did so because the GNP was standing on the edge of a precipice. But we still have a discussion that the party must dismantle and regroup. We have already concluded through a lawmakers’ caucus that we will have a drastic overhaul that will be stronger than shutting down and reopening the party.”

Park said the public doesn’t want a GNP that has merely changed its name. Reformists in the capital region, including Representative Chung Doo-un, have argued that the GNP must break up and relaunch.

Earlier yesterday morning, Representative Hong Sa-duk, a Park loyalist, told MBC radio that it is technically impossible for the party to disband and regroup because that would require a long and complex legal procedure. “The idea is good but unrealistic because the legislative elections come in three months,” Hong said.

Chung continued to insist the party break up. In an interview with SBS radio yesterday morning, he said it was inevitable for the GNP to disband. “Park said she will overhaul the party with reform plans stronger than relaunching the GNP,” Chung said. “But she has not presented any specific plans on how to do so. The time has come for her to make her plan public, but she hasn’t.”

Chung said Park must candidly admit that the situation is so serious she doesn’t really know what to do.

“If she gives up her presidential ambition and decides to truly support the conservatives and serve this country, there is nothing to stop her,” Chung said. “That’s also the only way for her eventual victory. But she doesn’t appear to be ready.”

Chung also challenged the Park loyalists’ argument that the GNP doesn’t have time to break up and create a new party, saying its liberal rivals have already done so with the Democratic United Party. Chung said some reformists may leave the party to create a new one because they cannot wait any longer.

“And the process of breaking up the party and creating a new one will be our campaign for the legislative elections,” Chung said, adding that the politicians who resist the idea of relaunching the GNP “do not have the guts because they have lived comfortable lives.”

It remains to be seen if Park’s declaration of preserving the GNP will quiet reformists’ demands.

Warning against people who “attempt to obstruct reform efforts and shake up emergency council,” Park said the members of the emergency council did not sign up for the job because they wanted to join politics.

Party spokesman Hwang said yesterday that the outside members on the emergency leadership won’t run in the April legislative elections. Six outside experts are on the GNP’s emergency council.

The GNP also decided to finalize specifics on reform of the candidate nomination process for the April legislative elections before the Lunar New Year holiday, which falls on Jan. 23.

Park said she wants the emergency council to submit a road map by next Monday, and a lawmakers’ caucus will take place to review the plan and finalize it by Jan. 23.