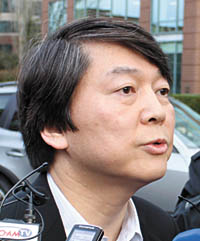 Software mogul Ahn Cheol-soo met with the billionaire philanthropist Bill Gates on Wednesday at the Bill & Melinda Gates Foundation outside of Seattle to get advice on how to run a charity.

After the conversation with Microsoft co-founder Gates, Ahn met with reporters and said the two had “discussed several topics of mutual interest” and that Gates advised him to “establish a foundation that can solve social issues more creatively and innovatively.”

The two tycoons released a joint press release after their conversation that said they discussed the “current global economic environment, global health and development for the poor, the impact and importance of foreign aid to the developing world, and current trends in the IT industry.”

According to the press release, “Ahn expressed a keen interest in how the Gates Foundation was established and organized its work, and its present activities.”

It said Ahn “kindly invited Gates to visit his foundation sometime in the near future, and both agreed to stay in touch on topics of mutual interest.”

Ahn, founder of software company AhnLab and dean of Seoul National University’s Graduate School of Convergence Science and Technology, announced late last year he will donate to society half of his 37.1 percent stake in AhnLab, the country’s leading antivirus software company. He said he will seek advice from Gates, who established the world’s largest charity dedicated to providing for children in developing countries.

The press watches Ahn closely because he has built a popular following among liberals and young Koreans and has started getting involved in politics, endorsing the winner of October’s mayoral by-election in Seoul. His following and his distance from Korea’s traditional political parties have made him a viable candidate for office, possibly even the presidency.

Ahn also said that Gates told him “to try to seek help when trying to solve problems rather than doing it alone.”

He also said the “outline of the charity foundation is being drawn up pretty well” and promised more details at the end of this month or early next month.

His trip got one political reaction. Independent Representative Kang Yong-seok said, “The real reason behind Ahn’s meeting with Gates is to talk about a business partnership with AhnLab and Microsoft rather than about the establishment of a charity foundation.”