Kim’s body to remain in mausoleum

Kim’s body to remain in mausoleum 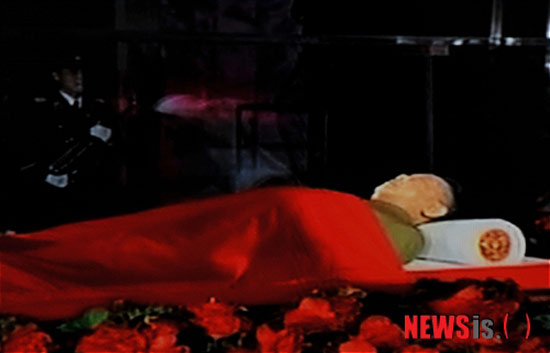 North Korea said yesterday the body of late leader Kim Jong-il will lie in state permanently at a mausoleum and his February birthday will be instituted as the “Day of the Shining Star.”

The North also said it will erect Kim’s statue and portraits and build towers across the country in what could be an attempt to strengthen his personality cult and justify the dynastic power succession of his son, Kim Jong-un.

“From the standpoint of Jong-un, Kim Jong-il needs to be idolized,” said a South Korean official, who closely monitors the North Korean situation. He asked not to be identified, citing policy.

Kim, who died of a heart attack last month, “will be laid in state at the Kumsusan Memorial Palace,” the North’s Workers’ Party said in a special report carried by the country’s Korean Central News Agency.

The mausoleum was home to the late Kim’s father, North Korea’s founder Kim Il Sung during his lifetime and converted to a mausoleum after his death to continue housing his embalmed body.

The North said it made the decision to reflect “the unanimous desire and ardent request of all party members, service personnel and people to hold (Kim Jong-il) in high esteem as the eternal leader of the party.”

North Korea continues to refer to the country’s founder as the “eternal president” and a towering bronze statue of him overlooks Pyongyang as befits the massive personality cult that pervades North Korean society.

The North already has about four statues of Kim Jong-il in the security agency and military units, according to a source who is in a position to know the situation in the North.

The latest move comes as Kim Jong-un consolidates his power.

On Monday, North Korean troops held a rally at the memorial palace to swear loyalty to their young supreme commander in the latest public show of military support for his succession.