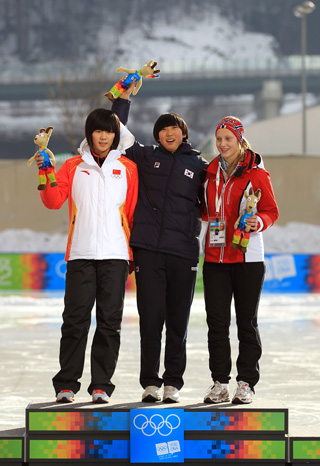 At the Olympic Speed Skating Oval, Jang posted an aggregate time of 81.689 seconds in the 500-meter race, beating China’s Shi Xiaoxuan by 2.64 seconds. Martine Lilloy Bruun of Norway took third with a time of 87.51 seconds.

“I am very happy for this win, and I am proud to be the first medalist for Korea at these Games,” Jang was quoted as saying by the event’s official Web site.

The 16-year-old Jang, who attends Uijeongbu Girls’ High School, wasn’t expected to finish on top at the event, and Korean coaches were expecting her to finish in fifth or sixth place.

However, Jang gave her best performance from the start, hinting at the surprise result.

Starting from Group 6 in the outer lane, Jang caught up with Shi in the second corner of the first race and finished with a time of 40.881, which was 1.10 seconds faster than Shi. With a cushion of more than a second, Jang was faster in the second race, finishing at 40.80.

“In the first race, I didn’t have good start,” Jang said. “But in the second race, I found more of a rhythm and was able to do it.”

This was the first time Jang topped the event at the international level. But the skater said that it wasn’t a big surprise for her, saying she knew she was capable of winning.

“To be honest, I was expecting a gold medal before the event,” Jang said. “My time for the 500 had been getting better, and when I looked at the other skaters’ records, I became confident that I could win.”

Jang was originally an inline skater but changed to speed skating when she was in fourth grade. Since then, she has become one of the top speed skating prospects.

“In inline skating you need physical power, and in the summer, it was very hard for me to give it my all because it was so hot. So I decided to dedicate myself to speed skating.”

But her inline skating experience eventually gave her stamina and a good foundation on the ice.

The 170-centimeter (five-foot, seven-inch) tall skater was a long-distance skater until last season but decided to focus on short distance races to take advantage of her long legs, a move that has proven successful.

Korean skating officials say that Jang, who has said that her role model is Lee Sang-hwa, the gold medalist in the women’s 500 at the 2010 Winter Olympics in Vancouver, has a bright future since she is only devoted to her sport.

Jang said her next goal is to win a gold medal in the next Winter Olympics, not at the youth level, but at the senior level.