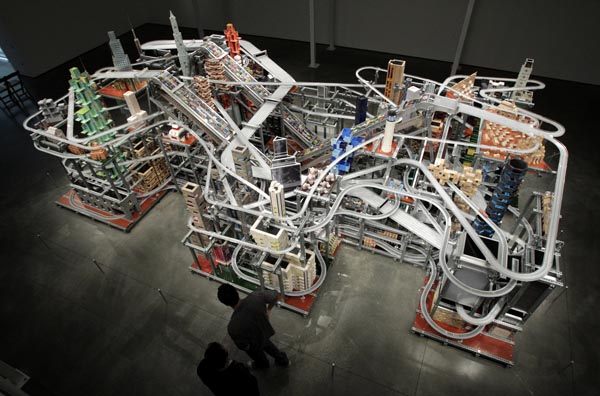 Chris Burden’s latest kinetic sculpture, “Metropolis II,” is displayed at the Los Angeles County Museum of Art on Wednesday. The sculpture does more than just imitate life. The colorful display of roads, cars, trains and buildings is art imitating what the artist foresees life being like in five or 10 years. [AP/YONHAP]

LOS ANGELES - Chris Burden’s latest kinetic sculpture, “Metropolis II,” does more than just imitate life. The colorful display of roads, cars, trains and buildings is art imitating what the artist foresees life being like in five or 10 years.

It will be a time, Burden forecasts, when cars will race across Los Angeles’ no-longer-gridlocked freeways and streets, past a skyline of towering buildings and single-family homes, at speeds of 240 miles per hour or more.

That’s just what the tiny cars do in “Metropolis II,” a colorful contraption composed of 1,100 miniature vehicles, 18 miniature roads, a tiny commuter rail line and dozens of small skyscrapers and other buildings. The cars, which Burden says reach “240 scale miles per hour,” are powered by a complex series of electronic conveyor belts and magnets.

“In essence, it’s sort of a complicated roller coaster system,” the artist, one of the pioneers of the Light and Space movement that flowered in Los Angeles in the 1970s, explained after throwing the switch on it earlier this week.

It goes on display to the general public this weekend at the Los Angeles County Museum of Art where a separate gallery has been constructed to house it, one with a balcony so people can view the work from either ground level or above. But it will only be powered up on Fridays, Saturdays, Sundays, and this week, on Martin Luther King Day.

It is to remain on display at the museum for at least 10 years under an agreement with Nicolas Berggruen, the billionaire businessman who sits on the institution’s board and who bought it for an undisclosed sum.

By the end of that time, Burden believes, we’ll be living a real-life version of “Metropolis II,” with real cars racing across the hillsides and over the freeways of Los Angeles, putting an end to traffic gridlock. Oh, and by the way, the cars won’t have drivers, just passengers.

“I’m personally looking forward to it because I don’t like driving in Los Angeles,” laughs Burden, an affable man of 65 who looks little different, other than being a bit stockier and better dressed, than he did in 1971, when he shocked the art world with his controversial performance piece “Shoot.”

For that work, which can still be viewed on YouTube, Burden had himself filmed being shot in the arm by a friend who stood 15 feet away with a .22 caliber rifle.

For the equally controversial 1974 piece “Trans-Fixed,” he had himself nailed, Christ-like, to the back of a Volkswagen bug.

More recently, he has gravitated to building large-scale sculptures made out of everyday objects.

In 2008, he built a 65-foot skyscraper out of Erector Set pieces and put it in the shadow of the 70-story General Electric building in New York City’s Rockefeller Plaza.

Burden is also the creator of “Urban Light,” a collection of 202 lovingly restored antique streetlights that were permanently installed in front of the Los Angeles County Museum of Art’s entrance in 2008.AP