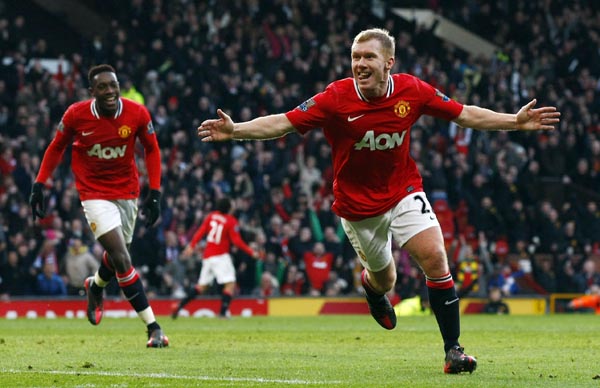 MANCHESTER, England - Sir Alex Ferguson backed Paul Scholes to prove the critics wrong after the veteran midfielder celebrated his return from retirement with a goal in Manchester United’s 3-0 win over Bolton.

Scholes scored an Old Trafford league goal for the first time since netting against Fulham in February 2009 and his first goal of any sort since scoring against the same opponents in London in August 2010.

Starting a game for the first time in eight months, the 37-year-old former England international showed what his side has been missing during a recent run which saw them lose to Blackburn and Newcastle on their last two league outings.

But his 45th minute opening goal on Saturday - the 103rd of his league career - was a well-timed reminder of Scholes’ ability after some critics questioned Ferguson’s decision to bring him out of retirement.

“He has that instinct for goals that he has had since he was a kid. And he did it again,” said Ferguson. “He popped up when he should have been enjoying it, sitting in central midfield controlling things.

“He has been one of the greatest ever United players. There has been negative stuff said about him this week, but when you see that performance, see that quality, you don’t lose that.

“He has been training hard the last few weeks, and we took him off at the right time. But he gave us over an hour of real quality, scored a goal and he is back.”

Scholes’ goal was all the more important as Wayne Rooney had missed a penalty midway through the first half, his fourth miss in his last eight attempts from the spot.

Danny Welbeck and Michael Carrick would go on to score second-half goals, which ensured a comfortable afternoon for United, who moved joint top of the Premier League with neighbours City ahead of the leaders’ trip to Wigan on Monday.

Rooney’s penalty miss capped a lackluster display and Ferguson said: “Wayne had his moments, but he can do better. I think the missed penalty kick upset him a little bit. But Welbeck did fantastic, and it is a good partnership.”

But a case was made by Ferguson - that Knight should have been red carded, instead of shown yellow, for denying a goal-scoring opportunity. “I think it was a sending-off,” said Ferguson. “All these inconsistencies from referees, they should be getting more direction from the very top.” AFP