Gov’t unfazed by loss of faith in euro zone

Gov’t unfazed by loss of faith in euro zone 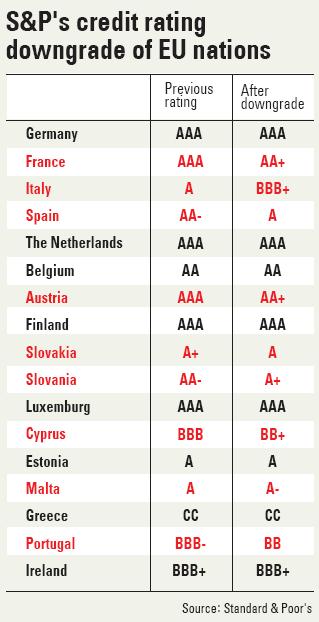 Korea is well prepared to deal with any negative fallout from Standard & Poor’s decision to downgrade the credit ratings of nine European countries over the weekend, the government said yesterday.

Seoul sought to reassure the public and investors about its export-dependent economy’s ability to mitigate future shocks amid worsening global economic conditions.

On Saturday, S&P downgraded the ratings of France, Italy and Spain, among others, saying that “the policy initiatives taken by European policymakers in recent weeks may be insufficient to fully address ongoing systemic stresses in the euro zone.”

The cuts saw France and Austria lose their coveted triple-A status, both slipping one notch, while Italy dropped two grades to BBB+ and Spain fell to A from AA-.

Local analysts worry that more downgrades by other ratings agencies, should they occur, could shake up Korea’s financial markets and spur an exodus of European funds.

“This significantly raises the possibility of that foreign investors may decide to bail out of the domestic market,” said Hong Soon-pyo, an analyst at Daishin Securities.

The sovereign debt turmoil in the euro zone is expected to further put a crimp on Korea’s exports to the European Union, which accounted for 10 percent of the country’s total exports last year.

This level of financial instability could also spark a domino effect by undermining the economies of the United States and China, which also rank as huge buyers of Korean goods.

But Seoul was quick to play down concerns by stressing its belief that the impact will be limited.

“These credit downgrades were long anticipated, and both the markets and the government have been preparing for such an eventuality,” said an official from the Ministry of Strategy and Finance.

Last December, S&P announced it was reviewing the euro zone due to the worsening debt crisis and the failure of European leaders to get the situation under control. The agency threatened to cut France’s credit rating down by two notches but instead settled for one.

Meanwhile, an official from Korea’s Financial Services Commission concurred that they had expected the downwardly revised credit ratings and already taken defensive measures.

Local analysts also noted that the outflow of European investment would be limited as many investors have already withdrawn their funds ahead of time.

“A temporary shock will be inevitable following an outflow of additional European funds, but the amount withdrawn will not be too large to manage,” said Oh Seong-jin, a market researcher at Hyundai Securities.

Before the downgrades were announced, the rumor mill was already grinding. But this had little impact on the Dow Jones Industrial Average, which declined only 0.39 percent. Other key European markets, including the United Kingdom, Germany and France, dropped by around 0.5 percent.