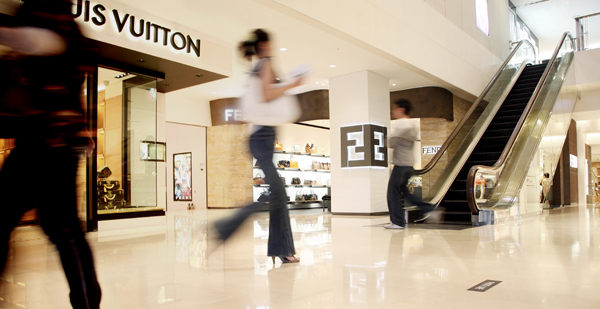 With demand growing for Hublot watches and imported BMWs, the luxury market is going strong in Korea despite sluggish economic growth, a trend that is exacerbating economic polarization as most of the population tightens their purse strings, industry sources say.

This split is highlighted by the fact that the two most searched-for fashion keywords online last year were Chanel, synonymous with high fashion, and Uniqlo, the fast-fashion brand that stresses affordability, according to a joint survey by Daum and the LG Economic Research Institute in December.

“People’s interest in both brands reflects the current polarization in spending,” said Park Jung-hyun, a senior researcher at the institute.

Meanwhile, sales of luxury goods at major department stores are apparently proving recession-proof - even though they may not quite be reaching the stellar level of sales in neighboring China.

And luxury watches are leading the trend, with sales at Lotte soaring 30 percent from 2010 as more affluent and fashion-conscious men choose to flash their cash with status symbols that come to the fore when hands are shaken over business deals.

Avenuel, the store within Lotte that specializes in retailing designer goods, plans to open outlets for four luxury Swiss watchmakers - Vacheron Constantin, Breguet, IWC and Hublot - by March as it broadens its portfolio to tap more of the market and demand for men’s luxury goods.

“Although many people are predicting the domestic economy will suffer this year, the luxury market is expected to enjoy strong growth. The numbers show there are still a lot of people out there who prefer luxury brands.”

He said luxury sales at the three stores grew by an average 13.5 percent on-year that month, while food sales climbed 2.9 percent and children wear’s 1.7 percent. All other sectors saw negative growth, with women’s suits (minus 11.5 percent) particularly hard hit.

According to a report released by McKinsey last August, luxury sales here have risen by at least 12 percent each year since 2006, reaching an estimated $4.5 billion in 2010. The consultancy expects the market to keep growing at a robust rate for three to five years.

“Koreans tend to buy luxury goods as a way of signaling their social status, as well as for reasons of self-indulgence,” said Aimee Kim, a McKinsey partner in Seoul who specializes in consumer markets. “They want other people to know that they’re wearing something expensive.”

According to the Korea Automobile Importers and Distributors Association (Kaida), 105,037 imported automobiles were sold in Korea in 2011, up 16 percent from 2010 to mark a record high. 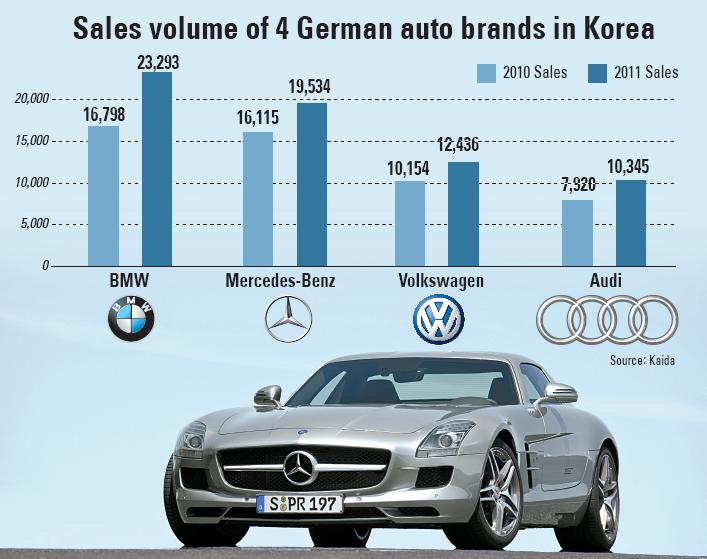 “Foreign automakers ramped up their promotional efforts to lure high-income earners last year because this demographic is generally less affected by recessionary conditions,” said an official at the association. “So we can say that the economic downturn did not really influence the imported car market last year.”

BMW Group Korea sold more than 20,000 vehicles here last year for the first time, more than any other foreign brand.

The German carmaker sold 23,293 sedans, while its compatriot Mercedes-Benz shifted 19,534 vehicles and Volkswagen and Audi sold more than 12,000 each - with Audi in particular registering a healthy first year in the market.

BMW’s 2011 5 Series models were priced at between 59.9 million won ($52,000) and 118 million won, while its 520d, one of the top-selling foreign sedans last year, retailed for 62.8 million won. By way of comparison with domestic brands, BMW’s cheapest sedan is five times more expensive than Hyundai Motor’s Avante, the most common sedan in the country.

Until just a few years ago, most foreign cars in the country belonged to corporations rather than individuals. But according to Kaida, the number of imported cars registered under individuals’ names stood at 55,698 last year - up 34 percent from 2007 - to account for 53.0 percent of the total.

“This shows that more people can afford to splash out on an imported car independently,” the official said.