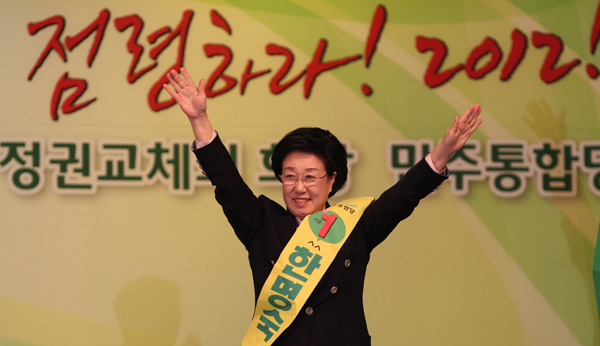 
Han Myeong-sook, former prime minister during the Roh Moo-hyun administration, was elected chairwoman of the Democratic Unity Party, winning 24.5 percent of the votes in a leadership election yesterday opened up to the general public.

More than half a million people took part in the election, voting in person or via mobile phones.

“Today, I declare the start of a long fight to judge the Lee Myung-bak administration,” Han said. “I will create the new future of Korea with you, burying the Lee administration and the Grand National Party in the past, and keep the promise to open a new era with the DUP’s victory in the next presidency.”

Promoting herself as “a mother and the iron lady,” Han said before the voting, “We have to choose a person who will fight against the ruling Grand National Party’s Park Geun-hye.”

“When I fought against poverty along with 99 percent of people, she opposed raising taxes on even 1 percent of the people,” Han said.

Nine candidates ran in the leadership election of the largest liberal opposition party.

Actor-turned-politician Moon Sung-keun finished the race second, and Representative Park Young-sun came in third. They are now on the party’s Supreme Council along with Lee In-young and Kim Boo-kyum, former Supreme Council members of the Democratic Party, and Park Jie-won, former floor leader of the party. The party’s floor leader, Kim Jin-pyo, is also on the council, and four more members will be appointed.

The new leadership will run the party during the April legislative election and the December presidential election.

The DUP was created weeks ago through a merger of the Democratic Party, loyalists of the late president Roh Moo-hyun and the Federation of Korean Trade Unions.

The election was unprecedented in allowing the public to vote. Any eligible voters older than 19 could apply on the party’s Web site and vote by phone or by visiting one of 251 polling stations.

The party said they counted the public vote and votes by their members for 70 percent of each candidate’s score, with the balance coming from votes by party delegates.

Han, 68, an activist-turned-politician, was born in Pyongyang in 1944 and crossed the inter-Korean border during the Korean War at the age of four with her parents. She studied French literature at Ewha Womans University and was a well-known activist fighting in the pro-democracy movement with her husband Park Seong-jun, a professor at Sungkonghoe University.

Han served as the first minister of gender equality and family by President Kim Dae-jung in 2001 and was appointed minister of environment in 2003 during the Roh administration. In April 2006, she became South Korea’s first female prime minister and resigned in March 2007.

She unsuccessfully ran for Seoul mayor in June 2010.