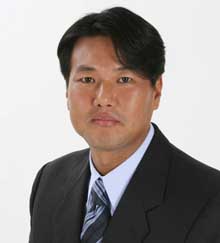 Kim, 45, is a well-known North Korea and security scholar from Sungkyunkwan University. Since 2004, he worked as Lee’s key strategist for foreign and security affairs. He joined the Blue House in 2008 when the Lee administration began as the presidential secretary for national security strategy.

Although he is one of the youngest members in the Blue House secretariat, Kim is known to be an influential advisor for Lee’s foreign and security policies.

According to Park, the decision to promote Kim is intended to better aid the president in North Korea policy as well as issues related to the Korea-U.S. free trade agreement.

A conservative hardliner, Kim is expected to be a counterweight to Unification Minister Yu Woo-ik, who favors a more accommodating approach toward Pyongyang. In his New Year’s address earlier this month, Lee said South Korea will leave the door open to dialogue with the North, but stick to its basic principles.