Sejong City is almost, but not quite, finished

Sejong City is almost, but not quite, finished 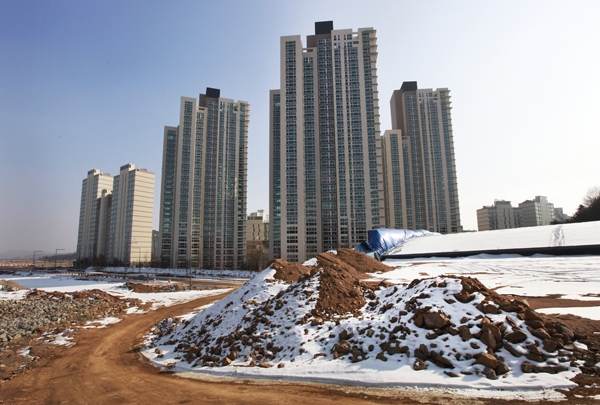 A view of First Prime, Sejong City’s first new residential complex, which has 2,242 apartments and 215 stores. Residents began moving in last month, but the city still needs some finishing touches. By Park Sang-moon

*The countdown has begun for the launch of Korea’s mini-capital in South Chungcheong, the new home for 36 ministries and government agencies and 10,452 civil servants. In articles running the next three days, the Korea JoongAng Daily looks at whether the new city will make the government more efficient, the economic impact and the political history of the project.

After an hour on a bullet train from Seoul Station to Daejeon, another hour on a subway to Banseok Station, 20 minutes waiting at a bus stop and another 30 minutes on the bus, a cluster of concrete buildings emerge in the barren, snow-covered fields of South Chungcheong. The road is empty of cars or passersby, and construction trucks are idle along the road. As the bus stops, a recorded announcement declares the arrival at Cheotmaeul, the first village of Sejong City.

Located 120 kilometers (74.5 miles) south of Seoul, Sejong City is Korea’s spanking new administrative capital. The brainchild of the late President Roh Moo-hyun is now becoming a reality. The Lee Myung-bak administration tried scrapping the plan, saying it would be folly to move most government offices so far out of Seoul, but the National Assembly shot down the attempt last June. Since then, the plan to build a “multifunctional administrative city” named for the great king from the Joseon Dynasty has steadily moved forward.

Last July, the road map for the massive move of the government to Sejong City was announced by the Prime Minister’s Office. It announced that 16 ministries and agencies and 20 government offices would begin moving this year, and the move will be complete by 2014. A total of 10,452 civil servants will relocate their lives from Seoul to Sejong City.

While construction continues on the government complex that will house the Prime Minister’s Office and other ministries, the first bloc of apartments, named “First Prime,” was completed in December after four and a half years of work. The complex has 2,242 apartments and 215 stores, and people started moving in on Dec. 26.

While the Multifunctional Administrative City Construction Agency said 302 households have moved into First Prime, a recent visit found a surrealistically lifeless scene. There were no signs of residents, and the gardens were bare. Commercial buildings in the complex were largely vacant, except for about 10 real estate agencies and two bank branches. There were no supermarkets, restaurants, dry cleaners, drug stores, clinics or private tutoring schools, the most common combination of commercial buildings in the usual apartment complex in Korea.

“The people started moving in in late December,” said Lim Jeong-min, a real estate agent who recently opened shop at First Prime. “Most of the owners of the apartments are public servants in Seoul, but the people who actually moved in are locals who were looking for cheaper jeonse [key money] than in nearby Daejeon or Jochiwon. When the Prime Minister’s Office relocates in September and the government offices are complete, we will see more public servants.”

According to Lim, there are about 30 real estate agencies in the complex and the nearby town of Daeseong-ri doing business for First Prime.

“We think the situation will get a lot better in about five years,” she said. “It’s the same for every new town. It’s like the first days in Bundang.” (Bundang is a large community developed in the 1990s in Gyeonggi, intended to attract homeowners living in Seoul. At the time, the project led a real estate boom.)

Not all the people doing business in Sejong are as sanguine as Lim.

“We opened up three days ago, but business is so bad,” said the owner of an interior decorating shop. “I rarely see customers. Even when I do, their first question is always ‘What’s the cheapest material?’ I really feel discouraged.”

The designer, who didn’t want to be named, contradicted Lim. “I used to have my business in Seoul, and I did business in Bundang and other newly developed towns,” he said. “This is nothing like Bundang. You come at night and count the windows that are lit. You will be scared to see how dark and gloomy it is.”

“So far, we only have banks and real estate agencies here,” said Lee Sun-hyeong, another real estate agent. “The people who move in will have many complaints because they can’t even buy necessities right away.” 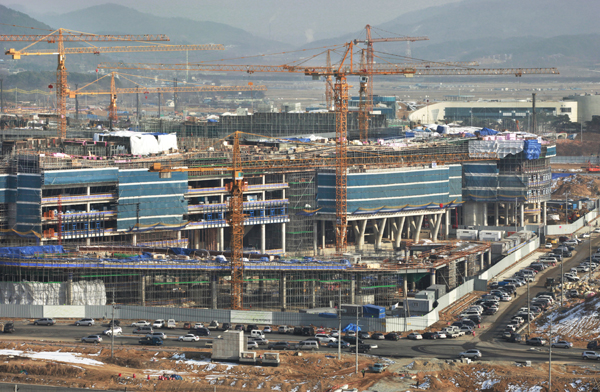 Construction of a new government complex continues in advance of a massive relocation of government offices by 2013. The Prime Minister’s Office moves in September, and its building is about 90 percent done. By Park Sang-moon 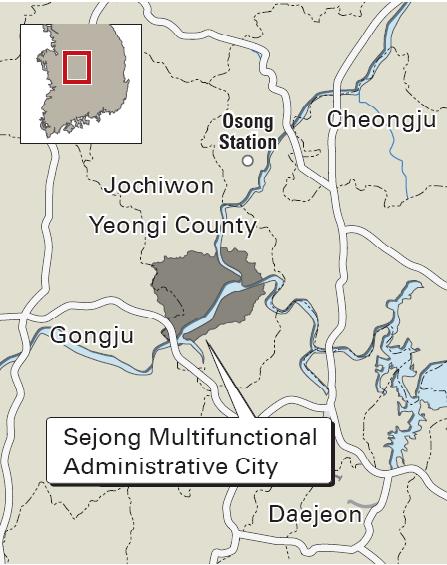 According to the Multifunctional Administrative City Construction Agency, up to 920 households are scheduled to move into First Prime by the end of February. Most of them are expected to be residents of nearby cities and towns and some public servants preparing for the government offices’ relocations. By June, 4,278 households are scheduled to move in, and First Prime will have a population of 17,000, the Multifunctional Administrative City Construction Agency said.

Elementary, middle and high schools will open in March, and three childcare centers to look after 144 children will be opened. By June, two more childcare facilities will open.

For now, a state-run health service center will open in the area to provide basic services, while private clinics are expected to open sometime in the future. The closest general hospital with an emergency room is located in Daejeon, about 30 minutes away by car.

For residents of First Prime, passenger cars will be a must, although the government has declared an ambitious plan to make an environmentally friendly city. Aiming at reducing 70 percent of carbon dioxide emissions by 2030, Sejong plans to replace 15% of total energy usage with renewable energy, and a public transportation system and bicycle paths will be built to discourage residents from relying on cars. The Bus Rapid Transit system, using unmanned buses, will connect the apartment complexes and the government complex, and link Sejong City with other cities, said Choi Young-joon, a public affairs official at the Multifunctional Administrative City Construction Agency.

But the BRT is behind schedule and is scheduled to start in August. The only means of accessing Sejong City now is by car or public bus. Right now, there only two bus routes available from Daejeon to Sejong City. The 651 bus runs every hour, 16 times a day. Bus 109 runs every 20 minutes during the daytime.

The Multifunctional Administrative City Construction Agency said the transportation network connecting Sejong to nearby cities will be completed by the end of this year. A road to link the city with the Osong KTX station in North Chungcheong will be complete in late June, and it will shorten travel time between Osong and Sejong City from 30 minutes to 10 minutes.

Other roads connecting Sejong City to the highway interchange and the city of Daejeon will also be completed by the end of this year.

“When the roads are all completed, Sejong City will be accessible by the bullet train, regular trains and highways within 15 minutes of travel time,” said Song Ki-sup, chairman of the Multifunctional Administrative City Construction Agency. “The transportation network will be a core infrastructure that will strengthen the city’s competitiveness.”

“This year alone, we have allocated 192.7 billion won [$167 million] to invest in transportation,” said Yu Geun-ho, a planning and finance officer at the agency.

The city also has a long-term plan to build more roads to reach the nearby cities of Cheongwon, Cheongju and Jochiwon by 2017.

While promising that Sejong City will be “Korea’s face to the world” and “Asia’s new green metropolis,” officials at the Multifunctional Administrative City Construction Agency admit it will take time.

“I think things will settle down around 2014,” Choi said. “It won’t necessarily be a great place for high-ranking public servants with college student-aged children, but this will be a great place to live if you are a rank-and-file civil servant with young children.”

The government says its aim is for Sejong City to be a self-sustaining city with a population of 500,000 by 2030. At 73 square kilometers (28 square miles), Sejong City is 27.5 times the size of Yeouido in western Seoul. Of the 22.5 trillion won budget for building the city, more than 7.6 trillion won has already been spent on infrastructure, residences and the new government complex.

Other administrative preparations are also ongoing. Sejong City will have its first mayoral and education office elections on April 11, and the official launch of the special autonomous city is scheduled for July 1.

“I have worked years on this project,” Choi said, overlooking the construction site of the government complex from the Milmaru Observation Tower, built in 2009 in a nearby park. “The Sejong City project had many ups and downs, but I feel very proud to see the progress. I really want to see the completion of the government complex building. We plan to cover the rooftop with greenery and flowers, and the view will be magnificent when the spring comes. I really think Sejong City will be an awesome place to be.”