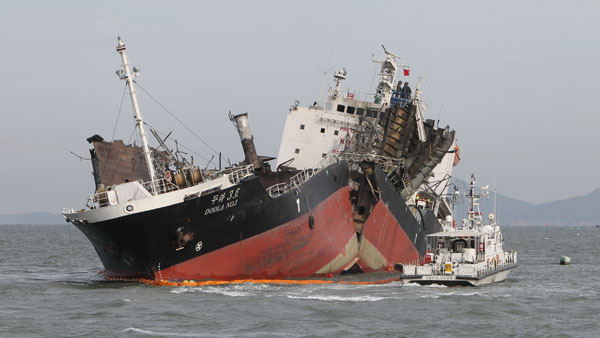 Oil carrier Doola No. 3 exploded in the western waters of the Korean Peninsula, killing five crew. While five others were rescued, a search and rescue mission continued last night for the six missing crew members. [YONHAP]


INCHEON - A freighter carrying about 100 tons of oil exploded in waters off Incheon, killing five sailors and causing six others to go missing.

According to the Incheon Coast Guard, the 4,191-ton oil carrier Doola No. 3 exploded yesterday for unknown reasons 4.8 kilometers (3 miles) north of Jawol Island in Ongjin County, Incheon, at 8:05 a.m. while sailing to a port in South Chungcheong.

The Coast Guard said that a 16-member crew - 11 Koreans and five Burmese - were aboard the vessel at the time of the explosion.

Only five of the crew, including the captain of the ship, Ahn Sang-won, 57, were rescued.

Five sailors, including 22-year-old Korean mate Lee Jong-wan, two Burmese and two other unidentified sailors, were confirmed dead. Their bodies were recovered by the Coast Guard and moved to a nearby hospital.

The Coast Guard said it dispatched two helicopters and 30 patrol ships to search for the missing sailors.

Doola No. 3 left Yugong Port in Incheon at 6:30 a.m. after unloading 6,500 tons of gasoline but suddenly exploded with a thunderous roar, according to the Coast Guard, and was nearly sundered in two. It was heading to Daesan port in South Chungcheong.

“The explosion happened about 20 to 30 minutes after the crew began cleaning the oil tanks,” Captain Ahn told the JoongAng Ilbo. “The windows of the steering house were shattered from the explosion, and the vessel began slowly sinking.”

The Coast Guard said that the vessel was carrying 80 tons of Bunker C oil and 40 tons of diesel, both used to power the ship, but the tanks holding them didn’t seem to be damaged in the explosion.

“We’ve put buoys from stem to stern of the vessel in order to prevent it sinking,” a spokesman of the Incheon Coast Guard said.

“The surviving sailors testified that the ship had no strike from the outside, and the explosion occurred while the crew was cleaning up the oil tanks. We’ll check whether the sailors didn’t follow safety regulations during the cleaning and also ask the National Forensic Service to inspect the ship in order to find the exact causes of the explosion.”

The Coast Guard said the most likely site of the explosion was the tanks that held the gasoline.

Busan-based Doola Shipping, the owner of the vessel, said that it’s assuming the explosion happened when the crew was clearing the cargo tanks of leftover gasses from the offloaded cargo.

“The atmosphere in the oil tanks has volatile organic compounds, and even static can cause an explosion,” a spokesman of Doola Shipping said. “The Doola No. 3 used to transport diesel, but it was carrying gasoline this time. We’re checking if that was part of the cause.”

A former captain of the ship said emptying an oil tank can be risky. “We do the job in waters not in a port because of the high volatility,” he said. “If the explosion happened while the ship is in port and linked to the pipeline, the damage could have been unimaginable.”