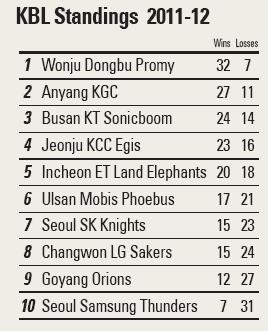 The clash between the country’s top two teams, Wonju Dongbu Promy and Anyang Korea Ginseng Corporation, was last week’s most anticipated game but the game didn’t exactly live up to its billing.

The Promy won the game on Wednesday, beating KGC 52-41, but the total points scored was the lowest in KBL history.

KGC’s 41-point score was low enough to take the unenviable record from the Daegu Orions (now the Goyang Orions), which scored 47 points in 2010 against KGC.

KGC, however, bounced back and reminded people that it is the second-highest scoring team in the league by beating the Goyang Orions 78-60 last Friday.

The team will have opportunities to build on that victory when they play Ulsan Mobis Phoebus on Thursday and Seoul SK Knights on Saturday.

Meanwhile, with that win the Promy is now four-and-a-half games ahead of KGC and is inching closer to clinching the regular season title.

In last week’s games, the Promy had the “triple towers,” comprising Kim Joo-sung, Yoon Ho-young and Rodrique Benson. With them, the team concedes an average of only 66.4 points and 31.5 rebounds per game, the best in the KBL.

By sweeping all three games last week, the Promy is on a six-game winning streak and will have the chance to stretch it to eight when it hosts the Knights on Wednesday and Jeonju KCC Egis, who beat the Promy in the last season’s championship series, on Sunday.

The Promy has a better head-to-head record against both teams, leading 4-0 and 3-1, respectively.

Last week was also a historic moment for the Seoul Samsung Thunders, the league’s bottom team, which marked its first home victory in 296 days by beating Mobis Phoebus 88-81 last Tuesday. That win ended a seven-game losing streak as well.

Two days later, however, the Thunders lost to Busan KT Sonicboom 103-62, the third-largest point gap in KBL history and the biggest margin this season.

The Thunders host the Elephants tonight and the Sakers on Sunday at home and are hoping to get their second home victory and kick start a winning run.