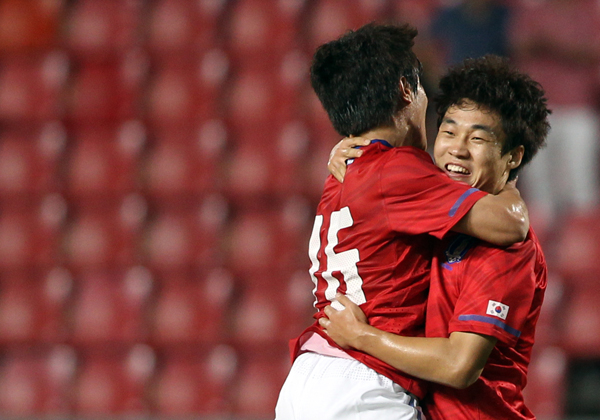 Korea’s Seo Jung-jin, right, celebrates his goal with teammate Baek Sung-dong during the King’s Cup football match against Thailand at the Rajamangala Stadium in Bangkok on Sunday. Korea won 3-1. [YONHAP]

Hong Myung-bo, coach of the Korean Olympic football team, said that despite a 3-1 victory over Thailand at the 41st King’s Cup on Sunday, players still need to work on their conditioning.

At the Rajamangala Stadium in Bangkok, Korea overcame the home team with goals from second-half substitutes Seo Jung-jin and Kim Hyun-sung.

Korea took the lead in the first half with a strike by Kim Dong-sub from just outside the penalty box in the 43rd minute.

The Taeguk Warriors gave up that lead just nine minutes into the second half as Teeratep Winothai beat the Korean offside trap.

But Seo, who came on in the 58th minute, dribbled past two defenders on the right flank before striking a powerful left-footed shot to put Korea back ahead.

Kim Hyun-sung, who came on for Kim Dong-sub in the 70th minute, scored the crucial third goal 10 minutes from the end.

“I congratulated our players and I thanked them for doing their best,” Hong said during the postgame interview. “But the players are not yet in their best condition.”

Korea is currently leading Group A of the Asian qualifiers for the 2012 London Olympics with two wins and one loss, but have two potentially tricky away games coming up. The team travel to Saudi Arabia on Feb. 5 and Oman on Feb. 22 for games that are expected to provide stern tests for Hong’s team.

To prepare, the under-23 team decided to participate in the King’s Cup, in an international football tournament that saw Denmark and Norway join Korea and Thailand.

The squads of the other three nations were comprised mostly of players from their domestic leagues, leading some to label the tournament “second-tier.” Hong, however, has previously said the event will be good tune-up for the upcoming qualifiers and an opportunity to test players’ fitness and try various tactics.

“The players are about 80 percent fit,” Hong said. “But we have enough time until the qualifiers.”

Korea, which previously won the tournament in 1998, will face Denmark tomorrow and Norway on Saturday and Hong will use players who didn’t play in the match against Thailand. He hopes that the Europeans will provide a tougher challenge, as they are traditionally more physically imposing.

“Some players ran too much in the first game, meaning they do not have time to recover before the next game,” Hong said. “I’m going to analyze Denmark thoroughly in the time remaining before the game.

Midfielders Kim Bo-kyung, Yun Il-rok, Yoon Bitgaram and team captain and defender Hong Jeong-ho didn’t feature in the opening game, but as this tournament allows the use of six substitutes, all of the 25-man squad will feature at some point over the two remaining games.

Although the purpose of this tournament is to get players fit and improve team spirit, the team will not want to give up its winning streak.

The Olympic team didn’t lose a single game last year - six wins and two draws - and the victory over Thailand saw them extend their unbeaten run to nine games.