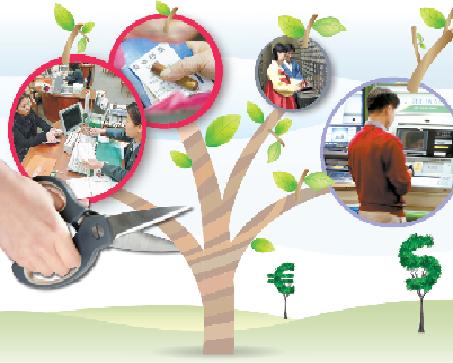 Since last year, several foreign banks have been scaling back their retail banking operations to stay afloat in an industry whose growth momentum drastically shifted to emerging markets since the 2008 global financial crisis.

For example, in July 2011 global banking giant HSBC agreed to sell 195 retail banking branches out of some 470 in upstate New York to local bank First Niagara for $1 billion, adding it would cut a maximum of 30,000 employees in its worldwide networks the coming two years as part of the bank’s strategic overhaul to scale back. 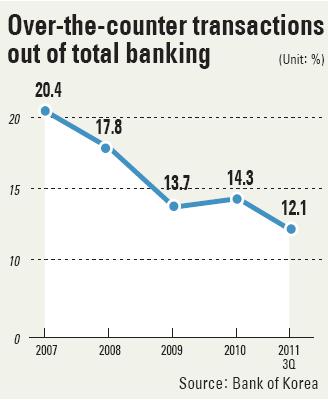 In Korea, observers have noted that the nation’s domestic banking industry is a saturated market.

The three biggest Korean commercial banks have roughly 1,000 nationwide branches per bank, with Kookmin Bank operating 1,146, Woori Bank 918 and Shinhan Bank 960 as of June last year - far more than, say, Bank of Tokyo-Mitsubishi UFJ, which had just 772 domestic branches as of March 2010 despite being Japan’s largest bank by market value.

Despite such signs of saturation, the number of bank branches is still on a gradual rise due to market share competition.

According to data from the Financial Supervisory Service, the total number of bank branches rose from 6,356 nationwide in 2007 to 6,630 in the third quarter of 2011.

“Unlike overseas banks that close down or sell off branches, Korean banks are still competing for market share within the domestic retail banking market,” said Koo Kyung-hoe, a banking analyst at Hyundai Securities.

“They see room for further expanding their branch networks.”

But the tide may be turning. First, the growing importance of alternative channels such as online and mobile banking has cut down the ratio of over-the-counter transactions from 20.4 percent of total banking transactions in the last quarter of 2007 to just 12.1 percent in the third quarter of 2011, according to the Bank of Korea.

Standard Chartered Bank of Korea, formerly SC First Bank, served as another illustration of the decreasing importance of physical branches.

The bank, which closed down 42 branches out of a total of 394 between June and August of last year due to a lengthy strike, was widely expected to suffer in its third quarter earnings reports with more than 10 percent of its branches out of commission.

In a meeting with reporters in New York last November, president and CEO of Standard Chartered Korea Richard Hill said 91 percent of banking transactions had been conducted through ATMs, online and mobile banking during the strike.

Meanwhile, bank branches themselves are increasingly smaller and rented rather than bought due to the poor real estate market.

“In the old days, when banks opened branches they would buy the property outright,” said an official with more than two decades experience in a local bank.

“Because real estate values rose rapidly, it was a viable investment as well as a place to do business,” he said.

“Part of the reason that banks can continue to open branches is that branches are much smaller,” said Koo, the banking sector analyst.

In the long-term, experts said that a smaller offline presence would be an undeniable trend in local banking.

“Depending on how heated the competition becomes, branches could increase in the short-term as banks jostle for a bigger piece of the pie,” said Suh Jung-ho, a research fellow at the Korea Institute of Finance.

“But in the long-term,” he said, “the number of banks’ offline branches cannot help but be adjusted as online channels increase.”