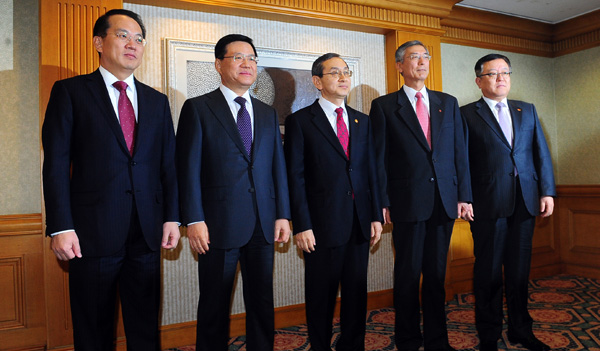 When LG Group, the country’s fourth-largest conglomerate, remodeled its headquarters in Yeouido last year, it was a year-long project with a big budget. But small- or mid-sized construction companies weren’t given the opportunity to even bid for the project. It was handled by ServeOne, the group’s construction arm.

A recent Samsung Life Insurance advertisement on television was produced by Cheil Worldwide, an affiliate of the insurance firm. Small agencies never had a chance at the account.

Starting in April, however, the insurance company will be placing orders based on a competitive bidding system that allows other advertising agencies a shot at its business.

The conglomerates told Kim that they will limit their favoring of their own subsidiaries in four sectors: system integration, advertising, distribution and construction. The representatives said they will open more doors to small- and medium-sized companies to share their growth, an idea pushed by the Lee Myung-bak administration.

“Until now, it was difficult for small firms to participate in projects led by large firms in sectors such as system integration, advertisement, construction, and distribution,” said FTC Chairman Kim, yesterday. “From now on, small firms will be able to win more opportunities to show their capabilities while large firms will also be able to boost their competitiveness by not relying on their affiliates too much.”

The government has been encouraging large firms to offer more work to small firms in those four sectors. More than 70 percent of the projects and orders for each of the four sectors were given to large firms’ affiliates, according to the FTC. Large companies favor their own affiliates, saying that method is more efficient.

“We’re aware that there are advantages for large firms to deal with projects internally,” said Shin Young-seon, an FTC official.

“But large firms should accept competitive bids for projects, which would help raise their competitiveness.”

Hyundai Motor said in a statement that it will place more direct orders with small companies instead of working indirectly through its main supplier.

The FTC said that apart from the announcement yesterday, it will investigate large firms offering favors to their affiliates, which the watchdog has suggested is an unfair practice.

The FTC said that the voluntary measures announced yesterday by the four conglomerates should be emulated by other large companies.

The Federation of Korean Industries, the country’s largest business lobbying group, released a survey showing that Korea’s top 30 companies are planning to spend 1.7 trillion won ($1.4 billion) this year to support small and mid-sized companies as part of their efforts to promoted “shared growth.”

The poll showed that the amount of money the country’s 30 leading businesses plan to share with their smaller suppliers and partners this year is a 12.1 percent increase from the 1.5 trillion won spent last year.

The FKI said that the funds will be used to assist the SMEs with material procurement, research and development activities and financing.

“The poll showed that Korea’s major companies are willing to take part in shared growth programs with their subcontractors,” the FKI said in a statement.