GNP to rate its reps and deny races to weakest

GNP to rate its reps and deny races to weakest 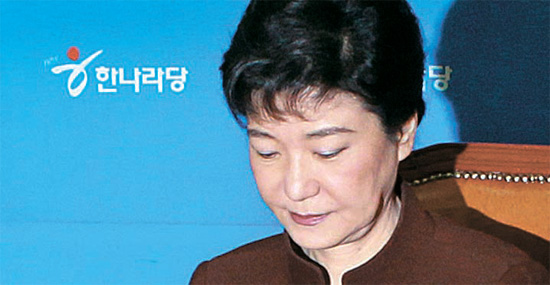 The Grand National Party yesterday decided to rate its current lawmakers and tell the bottom 25 percent not to bother seeking reelection in the April general election.

Park Geun-hye, the party’s emergency leader, said yesterday that reforming the process of choosing candidates for elections is the most important thing the party can do to regain public trust.

“The essence of the party’s reform is about nominations, above everything,” Park said yesterday in an opening statement of an emergency council meeting. “An unconvincing nomination process in the past has deepened distrust, and serious consequences followed.”

After Park spoke, the GNP’s emergency leadership decided to evaluate its incumbent lawmakers. An objective scale will be created to assess the lawmakers’ standing with voters based on opinion polls. The bottom 25 percent will not become GNP nominees in the upcoming general election, said Representative Hwang Young-cheul, spokesman of the GNP.

On April 11, voters will elect lawmakers for the 299-member National Assembly. Single-member constituencies comprise 245 seats in the legislature, while the remaining 54 are allocated by proportional representation based on the political parties’ popularity.

Of the incumbent 166 GNP lawmakers, 144 were elected by voters, while the balance are proportional representatives. Of the elected lawmakers, eight have already announced they won’t seek reelection.

That means that 34 out of 136 lawmakers will be denied nominations after they are evaluated.

“The decision is meaningful because the standard is guaranteed to be objective and fair,” Hwang said. “No one will have the nomination process under his thumb.”

The GNP has also decided to make strategic nominations in 20 percent of the country’s 245 electoral districts, while the remaining candidates will be chosen in open primaries. “Even if the incumbent lawmakers make the 25 percent cut, they can still lose in the open primaries,” Hwang said. “There is a high possibility that more incumbent lawmakers won’t be able to seek re-election.”

The emergency council also decided yesterday that the nomination review committee will be made up largely of outsiders, not party officials. The head of the committee will also likely be an outsider.

Stricter moral standards will also be applied, Hwang said. Politicians with records of tax evasion, financial and sexual crimes as well as corruption convictions will be ruled out from the nomination process. Hwang also said the party will try to place women as 30 percent of its legislative candidates.

A separate 100-member jury will also be created to select the GNP’s proportional representation candidates. According to Hwang, 75 percent of the candidates will be recruited strategically, while 25 percent will be selected by the jury group.

“The basic principle is nominating candidates that are trusted and wanted by voters,” Park was quoted as saying by Hwang. “If we make nominations based on personal ties, we will lose.”

According to Hwang, the nomination reform plan will be discussed at a GNP lawmakers’ caucus today and finalized on Thursday.

It remains to be seen how Park’s nomination system changes will be received by the lawmakers themselves. While Park loyalists and reformists generally accepted the idea of ruling out uncompetitive and unpopular candidates, others, particularly loyalists of President Lee Myung-bak, appeared to be uncomfortable with the plan.

Hwang also said the emergency council discussed reformist lawmakers’ demand for a drastic restructuring of the party but agreed that the timing was not right. On Sunday, a group of reformists demanded that the party abolish the current centralized structure led by its chairman and adopt an American-style system, where the party’s power is controlled by its floor leader.

“Although the restructuring is somewhat needed, what’s important is the leadership’s determination and will,” Park was quoted as saying by Hwang. “We shouldn’t blame the party’s structure.”

The emergency council also agreed that the matter was too grave for it to decide alone, recommending that GNP lawmakers and party members decide together.