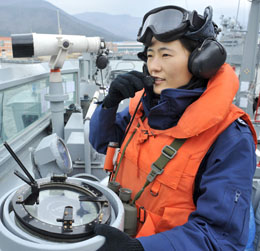 South Korea’s Navy has appointed its first two female officers to command fast attack craft, as it looks to expand its female presence on vessels in operation, officials said yesterday.

According to the source, Adm. Choi Yun-hee, the Navy’s chief of staff, briefed Defense Minister Kim Kwan-jin on this plan last week.

The two officers are Capt. Hong Yu-jin, 34, and Capt. Ahn Hyo-ju, 31. They will command Chamsuri-type vessels from the Navy’s Jinhae Base, about 410 kilometers (254 miles) south of Seoul, in patrolling waters off Jinhae Port.

Hong, joined the Navy in 2002, while Ahn in 2003 became the first female officer to graduate from the Korea Naval Academy.

“Being the first brings a lot of pressure,” Ahn said. “But I will try to blaze a trail for many young female officers to follow.”

In the long term, the Navy plans to appoint female officers to command larger vessels also, a Navy official said.

“It’s a significant development to give female officers the opportunity to command a high-speed patrol ship,” the official said. “Such experience will give them new perspectives on leadership and help them develop skills to manage crises and contingencies.”

There are about 190 female officers in the Navy’s combat duties, according to the Navy.

The Chamsuri boat, equipped with naval guns, machine guns and antisubmarine depth charges, can carry 27 sailors. The Navy plans to phase out about 70 Chamsuri-level ships starting in 2015 and replace them with next-generation high-speed boats armed with guided weapons. Yonhap