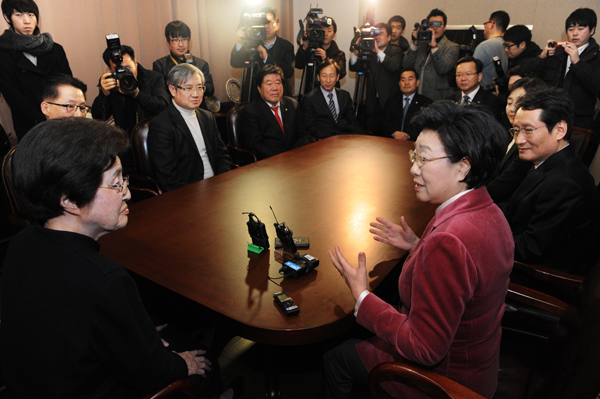 The new chairwoman of the largest liberal opposition party, Han Myeong-sook, began her first day on the job by declaring war against the Lee Myung-bak administration and the ruling party, claiming that the primary goal of the Democratic Unity Party will be winning the legislative and presidential elections.

Han, a veteran women’s rights advocate who had served as the country’s first and only female prime minister, won an overwhelming victory in the DUP’s leadership election on Sunday. She began her first day as the DUP’s chairwoman by visiting the meat market in Majang-dong, Seongdong District, early yesterday morning, in a clear display of her goal for “working-class friendly politics.”

Accompanied by other members of the newly elected DUP leadership, she then paid a visit to the grave of the late former President Kim Dae-jung at the National Cemetery and later met with his widow Lee Hee-ho.

“Kim left us the spirit of unity and politics that will comfort the people,” Han said. “I will walk the path of reconciliation that Kim had opened and rescue the economy and stabilize the country.”

While her first message was about reconciliation, Han made clear that she has no intention of being at peace with the Lee administration and the Grand National Party.

“The new leadership of the DUP will embrace the people’s request to judge and replace the Lee administration,” Han said, as she hosted her first leadership meeting. “We will unite the power of all opponents of the GNP to win the legislative elections.”

Han also said opinion polls showed that the DUP is more favored than the GNP.

“This shows the high expectation and the high desire of the public that we should win the presidency through the legislative election victory.”

Another member of the DUP’s new leadership, Moon Sung-keun, also launched fierce attacks against the Lee administration. He demanded the process of implementing the Korea-U.S. free trade agreement be terminated and independent counsels be appointed to investigate a series of scandals involving the president and the ruling party, including the cyberattack on the National Election Commission.

Moon, a 58-year-old actor, made a smooth entry into politics by landing in second place in the DUP leadership election on Sunday. Han’s chairmanship and Moon’s successful political debut seemed to herald the return of the Roh Moo-hyun loyalists. Han was a close aide to Roh, serving as his prime minister from 2006 to 2007, while Moon, by leading Roh’s fan club Nosamo, contributed greatly to Roh’s presidential victory against the rival GNP.

Sunday’s leadership election outcome is an indication that the Roh loyalists are now in full control of the largest liberal opposition party’s campaigns in the legislative and presidential elections.

It was also a successful comeback since they were ousted from the party after losing the 2007 presidential and 2008 legislative elections.

Signs of the Roh loyalists’ return to the center stage have already been seen as Moon Jae-in, Roh’s former chief of staff, scored favorably in opinion polls as a liberal presidential contender, following Ahn Cheol-soo.

Of the six newly elected leaders of the DUP, Representative Park Jie-won, former chief of staff of the Kim Blue House, was the only member of the old guard to remain in the leadership, a symbol of the dramatic power shift inside the liberal arena.

Park did not hide his discomfort yesterday that the party would be labeled as a Roh-loyalist group.

“I am in politics to uphold Kim Dae-jung’s line and ideology,” he said at the leadership meeting. “The party shouldn’t be an exception [from my belief].”

Under the directive of the new leadership, the DUP will create a nomination review committee by the end of this month. Concerns were already seen that the Jeolla-based politicians won’t be able to enjoy favoritism in the nomination process as their power is dwindling.

Han, in an interview with the JoongAng Ilbo after the election on Sunday, said the DUP’s reform will be about nomination revolution. “We have to have competitive candidates,” Han said.