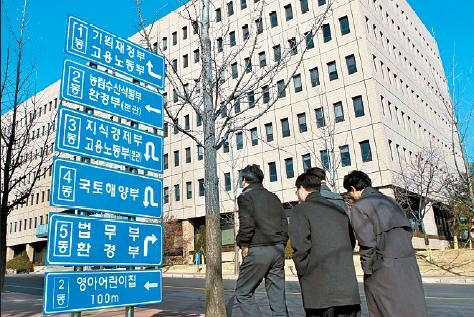 Officials walk into the Gwacheon Government Complex in Gyeonggi last week. As most of the central government agencies from the complex will relocate to Sejong City, civil servants are worrying over their lives in the new city. By Park Sang-moon


It’s lunchtime at the cafeteria in the government complex in Gwacheon, Gyeonggi, and the mood is anything but buoyant. The conversation at most tables seems to be about Sejong City, the country’s new administrative capital in South Chungcheong, where many of the civil servants will be forced to move in the next three years.

It’s hard to find a worker excited about the move, and some are in despair.

“I have two sons in middle school at the moment,” said an officer of the Ministry of Strategy and Finance, which will move from Seoul in December. “I plan to leave them and my wife in Seoul because I’m concerned about Sejong City’s lack of educational facilities.”

He said he was betting on the move to Sejong being scrapped, as the Lee Myung-bak administration unsuccessfully tried to do. 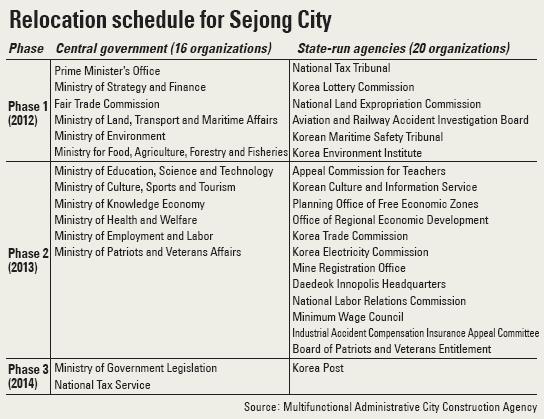 “Now that it’s been confirmed, I’ll just have to face reality and come to Seoul every weekend via bullet train to see my family.” In Sejong City, the officer plans to rent a one-room apartment.

“My ministry will move to Sejong City in December, but I’m only allowed to move into the new apartment I bought one year later,” said a director at the Ministry of Environment. “For the time being, I will have to find a jeonse [key money] apartment, but most of the contracts are for two years.” With a son entering high school in March, he doesn’t know if he will move his family.

Some civil servants are even thinking of quitting, especially women hoping to find husbands soon. Traditionally, civil servants are prime candidates for marriage because of their stable jobs, pensions and the prestige of office. Matchmaking agencies and ajummas [middle-aged Korean women] were keen to find them spouses in the past. But not so much these days, since potential spouses don’t want to live in Sejong City.

“I’m searching for a new job so that I don’t have to go down to Sejong City,” said a female official in her 30s from the Ministry of Knowledge Economy. “I really don’t want to go there.”

In the meantime, jobs at the Financial Services Commission and the Financial Supervisory Service are growing in popularity because they will remain in Yeouido, western Seoul.

The aim of the controversial project is to decongest Seoul by dividing the central government and to boost regional development.

Sixteen ministries and agencies and 20 government offices should begin moving this year, and the move will be complete by 2014. A total of 10,452 civil servants will relocate their lives from Seoul to Sejong City. By 2030, Sejong City is supposed to be a city with a population of 500,000.

Construction is in full swing on the new government buildings in Sejong City. The shift will start with the Prime Minister’s Office in September.

“The construction of the Prime Minister’s Office will be completed by April, and officials will move into the new offices five months later,” said Park Byung-dae, deputy director of the public policy division at the Multifunctional Administrative City Construction Agency. “As for the prime minister [Kim Hwang-sik], he will move his office in November, when the construction of the official residence is complete.”

Officials from the Ministry of Land, Transport and Maritime Affairs and the Ministry for Food, Agriculture, Forestry and Fisheries will be next to move in late November and will be followed by the Ministry of Strategy and Finance, the Ministry of Environment and the Fair Trade Commission in December.

At the same time, 14 agencies, including the Ministry of Justice, the Korea Communications Commission and the State Science & Technology Commission, will move from their Seoul offices to the government complex in Gwacheon.