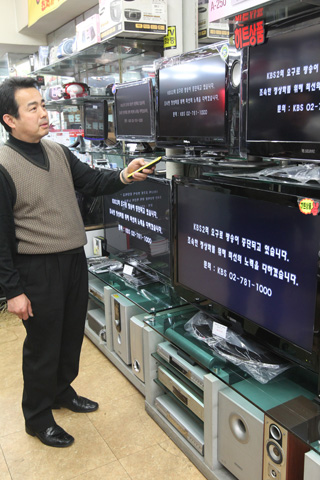 An owner of a home appliances store at the Yongsan Electronics Market in central Seoul checks the reception on his television sets yesterday after some 15 million cable subscribers lost access to KBS 2TV, a major national television channel. Cable television service operators stopped transmitting the channel yesterday because of a pricing war with the three terrestrial broadcasters, KBS, MBC and SBS. For the past five years, cable service operators have been at odds with the three networks over how much they should pay to retransmit their programs. One of the issues the two sides disagree on is how much of the subscriber fees the cable operators should pay to the networks to broadcast their programs. The networks are demanding 280 won ($0.25) per subscriber, and the operators refuse to pay more than 100 won. Meanwhile, the cable companies want higher cuts of the profits terrestrial networks earn from commercials. If negotiations don’t make progress, the cable operators have threatened to take KBS 1TV, SBS and MBC off the air as well. [YONHAP]