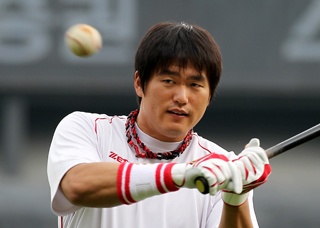 According to officials of the baseball club, Choi had discussions with the Tigers general manager Kim Cho-ho at a restaurant in Gwangju and decided to join the team’s training sessions after failing to show up to club activities that started on Jan. 6.

“I’m sorry to the fans, the club and my teammates, including manager Sun Dong-yol,” Choi said through an official statement released by the club. “Since I haven’t been training, I will put forth my efforts from now on and will perform well this season.”

The Tigers left for Arizona for their spring training on Sunday. Choi will first join the rehabilitation squad in Korea and is expected to start training today.

It had been rumored that Choi, who played for the Chicago Cubs, Florida Marlins, Los Angeles Dodgers, Boston Red Sox and Tampa Bay Rays, may leave the Tigers since he was absent from team workshops on Jan. 6 and the start of the offseason training camp two days later. The 32-year-old said he was sick during that time.

Choi, who joined the Tigers in the middle of the 2007 season, was reportedly disappointed with home fans’ criticism last year and wanted to be traded. The left-handed slugger only played 70 games and belted nine home runs with 37 RBI due to injuries.

To resolve the situation, the Tigers accepted his request and actually tried to trade him to the Seoul Nexen Heroes, but the talks fell through on Monday as the team found the deal wasn’t good enough. It was reported that the Heroes offered a left-handed reliever and a right-handed infielder for Choi.

After the talks had broken down, it was also reported that the Tigers might put Choi on the “restricted list,” which enables clubs to pay only 1/300th of the player’s original salary, but the Tigers pleaded one last time, and Choi apparently gave up his stubbornness.

The Tigers added that Choi, who hasn’t signed a new contract for this season, has entrusted all of his salary negotiations to the club and will endure any punishment that the Tigers give out.

The Tigers said action against Choi will be decided soon.

Choi has had his ups and downs since joining the Tigers in the middle of 2007. He batted .337 in 52 games with seven home runs in his KBO debut season.

His best season came in 2009 when he hit 33 home runs and drove in 100 runs while helping the Tigers win the Korean Series.