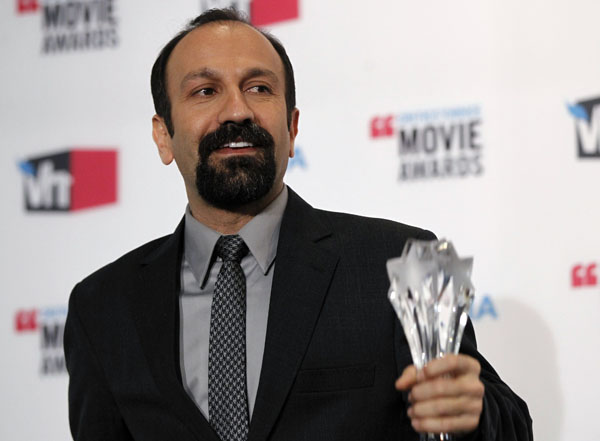 TEHRAN - One of Iran’s most prominent film directors said Monday he hoped the Golden Globes award to a fellow filmmaker will help lift the spirits of the country’s artistic community after the state-ordered closure of an independent cinema group.

Abbas Kiarostami lauded the “unique success” of writer-director Asghar Farhadi for “A Separation,” which won the best foreign-language film award Sunday at the Golden Globes ceremony in Beverly Hills, California.

Kiarostami told the Associated Press it was a bittersweet moment after authorities ordered the closure Jan. 4 of House of Cinema, an independent film group that operated for 20 years.

Officials said it lacked the proper permits, but artists and others claimed it was a political decision because the group often took liberal stands contrary to the government’s policies.

“A Separation” tells the story of a couple heading for divorce and dealing with domestic troubles with a young child and an aging parent. It examines gender, religious and class distinctions in contemporary Iran.

Amir Esfandiari, an official in the Farabi Film Foundation affiliated with the country’s culture ministry, offered congratulations to Farhadi and wished the film success as a possible Oscar candidate, the semiofficial ISNA news agency reported.

Fars News Agency said that the film will play for an extra week in a Tehran cinema. It had been shown in Iranian movie houses over the past months.

Last week, Farhadi proposed that Iranian authorities allow a vote among artists about the fate of the House of Cinema.

“I am hopeful that the award would partly help heal the frustration of people in the Iranian cinema industry,” said Kiarostami, whose films have won prizes including the Palme d’Or in Cannes. AP