The electronic theatrics of Dan Deacon

The electronic theatrics of Dan Deacon 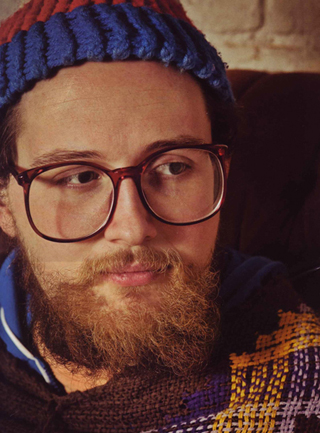 If you’re going to a Dan Deacon show, don’t expect to be a passive listener. At some point, the crowd is going to get involved.

The Baltimore-based electronic musician is playing for his first time in Korea in Busan on Jan. 27 and in Seoul Jan. 28. Both shows are being promoted by Sean Maylone’s Super Color Super agency.

The bearded, balding musician makes songs that you can dance to, but it’s not merely dance music. It’s joyous, communal and works as well in a small venue as at a music festival. Take 2007’s “Wham City.” It’s a nearly 12-minute long, drum-driven sing-along that starts quiet, adding more and more until it turns into a celebratory, euphoric chant.

Deacon is a master of the slow build. Songs rise in parts, crest, break, roll back, and then the wave begins again. “Snookered” grows delicately, with restrained synthesizers and drum machines carefully played over a faint, rippling vocal. The lyrics come in and the drums pick up as the keyboards increase in intensity. By the four-minute mark, all the parts have coalesced into an uplifted, ethereal dance track.

Initially, his vocals can be a turn-off for some. Deacon uses a lot of vocal manipulation, so it can sound strange, almost cartoonish. But heard live, when the samples and loops and drum machine are filling out the sound, it’s not a distraction.

Since 2002, Deacon has put out nine records. In 2007, he released “Spiderman of the Rings,” his first commercial full length. It was well received, and 2009’s “Bromst” followed its success. The latter record was more reserved and atmospheric. There are still some signature Deacon vocals and big ecstatic moments, but the songs are generally more complex and nuanced.

Deacon is one of the founders of Baltimore’s art and music collective, also named Wham City. Over the years, he has become well known for his live shows.

“In 2001, when I first started playing, I was really just trying to figure out how to play computer music, but have it not be boring to watch,” Deacon said in an e-mail interview with the Korea JoongAng Daily. “Back then, laptop shows tended to be pretty much like watching someone read a book on stage. So I wanted to avoid that as much as possible.”

In 2009, Deacon played a sold-out show at the Holocene club in Portland, Oregon. He set up on stage behind a low table of musical devices, cords and wires connecting knobs and sliders, all of it looking complicated and technical. As the show started, he invited the crowd to get up on stage with him. Those that could fit obliged him.

Then, the music started. It came on slow, with Deacon layering samples and loops and vocal chants, getting faster, louder, until the song took on a full shape. By then, the crowd was in full fervor, and the energy lasted through the show.

None of this is particularly remarkable for an electronic musician. The unique aspect of the performance came from Deacon’s crowd interaction. Twice he stopped the show and asked the audience to participate in a Deacon-led activity.

One activity was a call-and-response solo dance from a volunteer in the crowd, the other involved the crowd forming a human tunnel that led out the side exit, onto the sidewalk, and then back into the front of the venue - Deacon running through the tunnel once it was formed.

Deacon said shows by electronic musicians can be lacking in the theatricality of a live show, so he was forced to come up with an alternative.

“I just try to use as many elements of performance as possible, and the audience is a huge element of any performance,” he said. “So involving them and using the venue both as compositional and performance elements helps to create an experience unique to that night. And I guess the main reason is because it’s fun.”

Deacon recently finished a new album with producer Chester Gwazda, to be released by Domino Records at an unknown date.

As it’s his first visit to Korea, he said he doesn’t know what to expect.

“I have a few friends who are from there that will be in town while I am there,” he said. “I’m mainly looking forward to the food. Korean food is one of my favorites. I can’t wait to have it in Korea!”